Last Sunday a Chief dispatcher of production-dispatcher department of «KARPATNAFTOCHIM» Ltd., Roman Gurgula organized and conducted for the group of employees of Dispatcher service the field training to the production facilities of the Company. The aim of this event was to improve the efficiency of Dispatcher service work, because its team for the last years became significantly younger and some dispatchers have never been at a lot of facilities, at ethylene and polyethylene plants as well as at PVS-S and Chlorine and Caustic plant, and, so to speak, they are not alive acquainted with peculiarity of activity of the above-mentioned facilities. 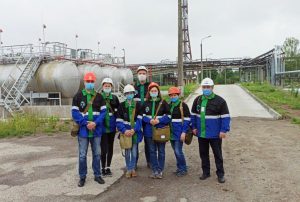 – The necessity of organizing of such excursion for employees of Dispatcher service to production facilities was planned long ago, – told Roman Volodymyrovych. – But due to their constant employment, because they work shifts, we could not manage to do this. – That is why, having analyzed the situation, we understood, that it’s more real to gather a group of dispatchers in a number of  6-7 persons in order to visit production facilities not on a weekday, but on a day off. So last Sunday the first group of six employees of Dispatcher service together with me hit the road to production facilities, from which they constantly get different information mostly from shift foremen. Most of all, dispatchers had questions to shift foremen and were interested in the work of equipment, control rooms, storing, loading of final product, unloading of raw materials and other processes, which are made their by the personnel.

Practically we visited all divisions of ethylene and PE units as well as PVC-S and Caustic Soda unit and we also were at observation deck of ethylene production unit, from where dispatchers have seen cracking furnaces, steam boiler, columns of cuts’ separation and other process equipment; and about the application of this equipment in the process of products output was told by foremen of cracking division, compression and cracking gas splitting as well as by specialists of hydrocarbons production  division.

A group of Dispatcher service also visited railway division and division of main pipelines and was acquainted with work of these teams. In particular, a shift foreman of main pipelines division Larysa Sondey more in detail informed our employees with the process of ethylene supply to the division from VC facility and to ethylene pipeline «Kalush – West border»; via this pipeline the product could be transported to Hungary and back to our Company.

Further dispatchers continued the acquaintance with subdivisions of Company on the territory of PVC-S and Caustic soda production facilities. And just at that time to Chlorine and Caustic soda production facility by membrane process came containers with technical salt, and it was a great chance for our employees to see in reality the method of this raw material unloading.

There visitors also viewed a storehouse of salt, tank farm of caustic soda and were in the control room. Then they moved to VC and PVC-S plants and they finished their excursion to production facilities of Company  at PVC-S plant where they viewed the division of PVC bagging to sacks and big-bags, visited warehouses of final products and points of loading of final commodity to automobile and railway transport.

According to the information of Roman Gurgula, the acquaintance of the second and the third group of employees of Dispatcher service of production-dispatcher department with work of production facilities of «KARPATNAFTOCHIM» Ltd., is also planned to organize on Sunday, correspondingly – the 5th and  19th of July.