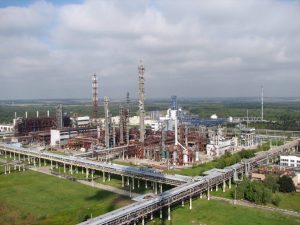 War did not leave indifferent any Ukrainian. They join the fight with enemy both directly in combat zones as well as on occupied and unoccupied territories.

Teams of production enterprises do not stay away from aggressive actions of Russian army. Among them is also Company «KARPATNAFTOCHIM».

Yarema Rudyk, General Director Deputy of «KARPATNAFTOCHIM» told us what the enterprise and his employees are doing for victory over the enemy.

– First of all I would like to say, – tells Yarema Bogdanovych that in spite of  the shutdown of  main units, at present are fully working  other workshops of our enterprise, which ensure the livelihood of the city and businesses of Kalush industrial zone. These are, particularly, treatment units that are available at our division of neutralization and treatment of industrial waste waters, where domestic sewage from residential areas of Kalush also comes. Air separation unit is operating too, where, as has been repeatedly reported, the production of liquid medical oxygen was established, which is gratis provided to our medical institutions of Precarpathian and neighboring areas            And though main production facilities of «KARPATNAFTOCHIM» now are forced to stand still, the Company retains the staff, to which is paid a salary. Taxes are also paid in full to state and local budgets as well as mandatory payments are paid to state funds.            Our enterprise immediately responded to the relevant requests of the city administration, territorial defense, and state authorities on the provision of financial and material assistance with the aim of improving the defense capabilities of the Armed Forces of Ukraine. In turn by «KARPATNAFTOCHIM» the own initiatives were shown and implemented, that will help to the defenders of our state            I want also to remark that each worker of our enterprise has individually supported our Ukrainian army via transferring funds to the appropriate account.

It is worth noting that a great number of our petrochemical workers are today in the units of Armed Forces that are fighting with the enemy, as well as some of them serve in the divisions of territorial defense.