Unit of hydrocarbons bottling of ethylene and polyethylene facilities of «KARPATNAFTOCHIM» Ltd., belongs by area to the largest subdivisions of this petrochemical enterprise. Its five divisions occupy in total the territory over 50 hectares. 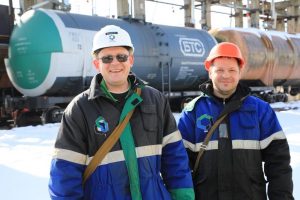 And in fact, a chief of this Unit Roman Sluzar has more than enough worries with organization of process tasks fulfilment, as well as looking after the territory. And besides of that, one year ago a need arose for restructure of pipe-rack for benzene, one of the main output products.

– Before restructure we filled benzene into eight-axis and four-axis  railway wagons, – tells Roman Igorovych. – But taking into consideration market requirements, became understandable that products consumers currently demand it to be in so called tank-containers, which are located on railway platforms (two tank-containers at each); in these tank-containers could be filled up to 25 tones benzene.

– How such transportation could be profitable for production workers  and for products consumers?

– For us first of all this is advantageous, because products loaded to tank-containers can go directly to the consumer without overfilling points. Previously in order to deliver benzene to consumers that use sea transport for conveyance was necessary to fill it into tanks at marine terminals, and then from these tanks the product was loaded into vessels. And now products in tank-containers are charged to the vessel directly.

Moreover, the absence of intermediate stages between the producer and consumer prevents the products losses, and that is why method of its transportation in tank-containers is currently widely used in countries of the European Union.

– It’s known, that under project of specialists of design department all activities for its realization were made by workers of repair department and control and measuring devices and automation division (Instrumentation) of «KARPATNAFTOCHIM» Ltd. And whether during a year some other works for project improvement were made?

– Firstly I’d like to mention that from the period of project realization our staff has perfectly mastered a new scheme of benzene bottling, and can manage its productivity and possibilities. And if still some slight issues occurred, they were instantly removed by process personnel of the division and by instrumentation personnel of the enterprise» Currently we have for benzene transportation 112 tank-containers, which are correspondingly located on 56 platforms.

For products delivery to consumers, namely to Chornomorsk, Odessa region, we form the train from 28 platforms. We store in tanks benzene, produced within this period.

During the last overhaul, which was at our enterprise in October, last year, was made the total repair of under- pipe rack rails actually in all sectors of the Unit, and also in particular, in the sector of aromatic hydrocarbons, where in addition to benzene, we ship to the consumers С9 cut and pyrolysis resin; the above-mentioned repair favored to more reliable process of products loading.

It’s worth to stress the job of workers from repair division of the main headquarters, as well as process personnel of division that were mounting a new system of pipelines heating. The need of this project implementation that, apropos, was elaborated by design workers of our enterprise, has arisen due to faulty operation of an old heating scheme, so far as benzene is inclined to crystallization at temperature lower than plus 4,7 degrees.

To the aforesaid about working days of the team of our unit, I’d like to add that its present stable operation is secured by a qualified work of our production workers as well as by support of centralized services of our enterprise.

– workers of the unit are loading benzene into tank-containers;