As it has already been informed in the previous editions of «NK», dated October 26, 2020 at the production facilities of «KARPATNAFTOCHIM» Ltd., was started the overhaul of process equipment and pipelines. A huge amount of activities are also foreseen to be performed at the Units of ethylene and polyethylene.

Yaroslav Shepida, Chief Production Manager Deputy informed us how are the repairs activities moving at present, and which important targets have already been reached.

– Currently (the interview was taken in November 10 – Author’s words) all planned repair works are on the final stage, – tells Yaroslav Fedorovych. – Within this period were opened, revised and cleaned more than 120 pieces of heat exchanging equipment as well as a great number of columns, vessels and reactors.

Among all executed important jobs I’d like first of all to note the jobs, which have been performed by Company «TECHNOLOG» from city Sumy at the division of cracking, compression and splitting of cracking gas. The specialists from this Company made the revision of mechanical seals of pyrogas gas, ethylene and propylene compressors in due time. Specialists from Sumy also made revision of rotor condition at pyrogas compressor.  However commissioning and start up of all three compressors is being made under supervision and direct participation of specialists from German Company Siemens AG. 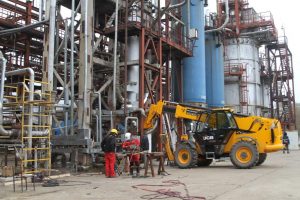 Considering the tight schedule, defined for overhaul activities, was taken the decision to entrust the repair works fulfillment at hydrogen compressor to another company from Sumy – «SENSI», which unlike Company «TECHNOLOG», for the first time worked at our enterprise

Important activities for substitution of SPM pipeline at Pyrotol Unit are being almost completed by well-known to us Odessa Company «NAFTOCHIMSPEZMONTAZH» at the division of hydrocarbon production. In this subdivision will also be performed works for substitution of convection zone of one of furnaces. And at the division of hydrocarbon bottling during overhaul was made the full repair of tracks under pipe racks.

– How will be made the start–up of production divisions and when will this process be commenced? 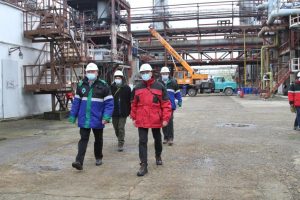 It’s worth to note, that together with repair works fulfillment, the process staff of the divisions makes corresponding activities for preparation of Units for start-up. Water cooling systems, flare systems, demineralized water preparation system and others are being put into operation.

A particular attention is paid to these issues by Unit’s staff themselves as well as by Managers of production facilities and by Management of the Company. Daily production meetings directly at the Units with participation of General Director of the Company Ivan Pidsadyuk, his Deputies and Leading specialists of the Company facilitate the implementation of these activities.

Was recorded by Anatoly Gayovyi.