As previously reported, in May 5 the ethylene production facility was shut down for the period of five days in order to carry out the planned jobs for equipment cleaning and flushing.

And already in May 11 at the meeting under heading of Ivan Pidsadyuk, General Director of the Company, a Manager of ethylene and polyethylene production facility Ivan Fedoriv informed that all planned jobs have been fulfilled in full and on time and today at 17PM will be started the activities for the Unit startup. 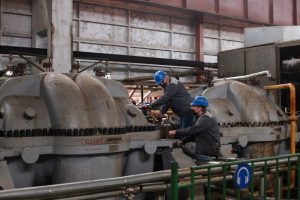 In his commentary on this occasion in May 13 Ivan Fedoriv mentioned:

«Start-up  activities lasted  12 hours and already in May 12 at five o’clock in the morning we received final products–ethylene. And though we never make the accounting of starting activities duration at ethylene facility, I could hardly remember, although I have already been working there more than 30 years, when previously we had managed with similar jobs fulfillment within such short period of time».

Its’ worth to remind that within five days of the scheduled shutdown at the units of pyrolysis, compression and splitting of pyrogas and hydrocarbons output by efforts of their process personnel, by workers of repair department as well as by third party companies «Stanislav-Montazh», Grebinkivsky Machine-Building Plant, «Ukrainian Building Association» and some others, was purified and flushed 29 large heat exchangers.

Some jobs concerning the prevention and cleaning of pyrogas compressor parts at the unit of pyrolysis, compression and splitting of pyrogas have also been made under participation of specialists-petrochemical workers and Company «Technolog» from the city of Sumy.

On photo: specialists from «Technolog» are making diagnostics of pyrogas compressor.