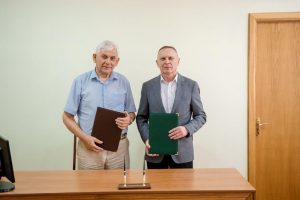 As it was already reported, at the beginning of June at «KARPATNAFTOCHIM» LTD was a meeting of General Director of the enterprise Ivan Pidsadyuk with a Rector of Ivano-Frankivsk National Technical University of Oil and Gas Evstafiy Kryzhanivsky.

In the meeting also took part the General Director Deputies and chief specialists of the enterprise from the one part and leading scientists and Pro-Rectors of the university from the other part. And exactly at that time was taken the decision to hold the next meeting on the premises of the university with a possible signing of a new Agreement about the cooperation.

So on the 15th of July Ivan Pidsadyuk together with his Deputy Yarema Rudyk visited the University. First of all, accompanying by the Rector of university Evstafiy Kryzhanivsky, the First Pro-Rector Oleg Mandryk and Pro-Rector Maxim Kartash they were acquainted with the work of main chairs of this High Institution of Precarpathian and after that was held the meeting, which was ended by the signing of a renewed Agreement about the Cooperation. 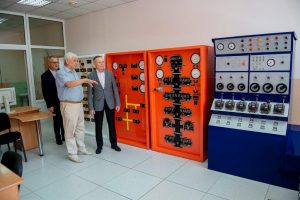 In his speech on this occasion the General Director of «KARPATNAFTOCHIM» emphasized that Kalush enterprise is a highly developed technological complex with modern Units which were built under technologies of famous German and American Companies. Currently the enterprise is interested in the replenishment of the team by highly qualified young professionals that are being taught and prepared in the walls of the technical university.

«Moreover during preparing of this Agreement we foresaw a possibility of joint realization of a number of projects and engineering elaborations, particularly concerning the introduction of energy saving technologies, reduction of greenhouse gas emission and others.And I really hope that the cooperation of our enterprise and National Technical University of Oil and Gas will be mutually beneficial» – noted Ivan Pidsadyuk.