At these meetings was disclosed information concerning the consequences of floods in Kalush region, as well as was made the assumption, that water level in the river Limnytsa during pouring rains has been significantly risen due to water gates opening at Chechva Reservoir of «KARPATNAFTOCHIM» Ltd. 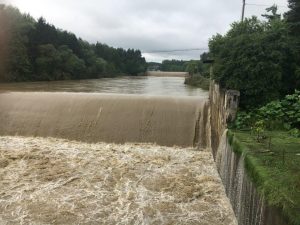 The editorial staff of weekly newspaper «Naftohimik-Kalush» asked Volodymyr Shevchuk, a chief of utilities provision for production facilities of the Company, to comment the situation. And he informed as follows:

«Chechva Reservoir, that is situated in the middle current of the river Chechva between the village Nyzhniy Strutyn (in the upper part) and natural boundary Pidmonastyr, village Svarychiv, Rozhnyativ district, is  a  hydraulic structure,  which was formed by ground dam and is fed by effluents of mountain river Chechva. Its maintenance is made by «KARPATNAFTOCHIM» Ltd., in accordance with Regulation of Exploitation of Chechva Reservoir, which have been elaborated and approved by State Agency of Water Resources of Ukraine for provision with water the consumers of industrial zone of Kalush.

Discharge of flood waters, which together with flows of river Chechva are coming to water reservoir, is made by means of gradual opening of gates that block water dump shutters at spillway dam. After water dumping at the upper dam, the flood waters are going through the middle and lower water-spillway dams (without regulation) and via diversion channel are coming to river Chechva. It’s also necessary to take into consideration the fact, that besides water-discharge from water reservoir, into river Chechva also flow waters of mountainous river Duba.

In view of the above-mentioned, the maintenance of Chechva water reservoir (discharge of floods – lifting of water gates) does not influence on formation of floods and water rise in the basins of rivers Chechva and Limnytsia».