It has already been reported on the pages of «NK» that the enterprise is ready to ship this medicine to the hospitals of Precarpathian on charitable basis. 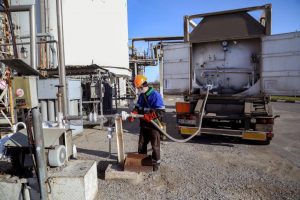 And in December 2 it has become known, that the employees of air separation unit, where liquid oxygen is produced, loaded into cisterns of two specialized tank trucks four tones of the above-mentioned products for needs of Kalush central regional hospital.

According to information of Mykhaylo Kyzymyshyn, a chief of this structural division of «KARPATNAFTOCHIМ» Company, their team was ready two weeks ago to supply medical oxygen to hospitals of Precarpathian, and particularly to Kalush central regional hospital. However unsolved issue of logistics, i.e. the delivery of oxygen to medical institutions hampered to do this, as far as the enterprise did not have necessary auto transport for this action.

– But now when tank-trucks arrived to us, this issue will also be solved, – noted a Chief of division.

In the conversation with journalists this information was also confirmed by Yarema Rudyk, General Director Deputy of «KARPATNAFTOCHIM» Ltd.  And he in particularly emphasized that:

«Unfortunately, unsettled issue of logistics really could not permit us to deliver our oxygen to hospitals of the region.

Ivano-Frankivsk regional state administration was informed by us about this problem, and the administration initiated meetings with participation of Department of health protection, management of RSA and our enterprise. And on the 24th of November was hold selector meeting under participation of Iryna Sadovyak, the First Deputy of Minister of Health Protection, Marya Savka, temporary acting as Head of regional state administration as well as other officials. At this meeting Marya Savka mentioned, that «KARPATNAFTOCHIM» can daily produce and deliver 4-7 tones of medical oxygen, which will be  provided for needs of hospitals of Kolomyya, Gorodenka and Kalush districts.

We are ready to fulfil all our obligations regarding this, and medical institutions together with their local administrations should secure the trucks, which will deliver medical oxygen to hospitals. In order to provide with this medicine the hospitals of Precarpathian on charitable basis, our Company concluded a corresponding Agreement with Charitable Foundation «Pokuttya».

On the photo: tank truck on the territory of the Unit is being loaded with medical oxygen for needs of Kalush Central Regional Hospital