On the 7th of May «KARPATNAFTOCHIM» Ltd. received from State Service of Ukraine on medicines and drugs control (Derzhliksluzhba) the license for the permit of economic activity  for production of  medicines. 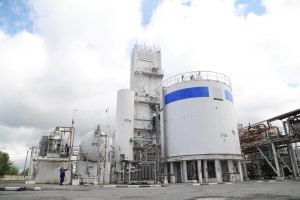 It particularly refers to the output at the air separation unit a new grade of final product — medical liquid oxygen. Now it’s officially allowed to the Company to produce it and to sell to medical institutions, where due to pandemic of coronavirus appeared the necessity in the additional provision with oxygen.

According to the information of Eduard Maslov, technical department chief, the nitrogen-oxygen unit at the enterprise was built pursuant to the design of German Company «Linde» during restructure of Vinyl Chloride production facility in 1991-1996. The main target of the above-mentioned unit was to secure the facility of VC production with commercial gaseous oxygen, because prior to the restructure, at this facility the unit of oxygen chlorination (oxychlorination) of ethylene was conducted by means of hydrogen chloride and atmospheric air.

As far as the restructured facility of VC production does not operate at 100 percentage of load, the part of commercial oxygen, which is produced and transferred to liquid state, is sold to the consumers. But there was the time when oxygen was also bought by medical institutions and enterprises that supplied this product like the medical one. This oxygen for its technical and physic-chemical indices corresponds to all medical requirements, i.e. to medical oxygen, remarks Eduard Maslov.

Derzhliksluzhba of Ukraine reviewed and established more strict requirements to the technical and qualitative parameters of this product, to its transportation, storing etc. That is why the management of the Supervisory Council of «KARPATNAFTOCHIM» Ltd., set the task to receive the license for the production of liquefied medical oxygen.

– Such task was set in the year 2019 — prior to outbreak of coronavirus disease, says Eduard Maslov:

“But we had nothing to do before with production of medicines. Besides of that, Derzhsluzhba of Ukraine set really high requirements to the preparation of all necessary papers, which must be handed over to them as well as the application for license grant for permission to carry out the economic activity for industrial output of medicines. That is why the additional time was needed in order to clear out certain organizational, legal and other issues. And more intensively we, together with specialists of analytic control of our Company, started to make preparation of papers for application of license receive  this year, when in Ukraine have already been imposed the restrictive measures due to coronavirus spreading“.

Documents went through a few stages of approval, and only then the Ministry of Health Protection of Ukraine has authorized Derzhsluzhba to conduct the audit at nitrogen-oxygen unit and in the laboratory of air separation unit.

In April, 23 the unit was visited by two auditors of Ivano-Frankivsk branch of Derzhliksluzhba, who, on the outcome of the test, drew up a corresponding Certificate and sent it to Kiev to Central Office. And only then Derzhliksluzhba took a decision to grant to «KARPATNAFTOCHIM»Ltd., the license, made in electronic form, for economic activity of medicines production, namely- liquid medical oxygen. The effective date of the license is the 7th of May, 2020, term — unlimited.

Gaseous commercial oxygen at our enterprise consumes only VC production facility. And its excesses in liquefied form, which are made and stored in a special vessel, constitute at the average 80-100 tons per month. Nearly such scope of liquefied medical oxygen could be sold by the Company each month.