There is hope, that in the nearest future it will also work on oxygen from Kalush enterprise

As it was already mentioned in the previous edition of «NK» by General Director Deputy of «KARPATNAFTOCHIM» Ltd. Yarema Rudyk, the enterprise procured for needs of Kalush Central Regional Hospital the oxygen station on total value of one million UAH, which will be used for liquid oxygen storage and its gasification. According to information of Yarema Bogdanovych, the cryogenic station has already been delivered to Kalush in October 21.

A correspondent of «NK» asked the General Director of KNE «Central Regional Hospital» Ivan Krasiychuk and his Deputy Mykola Dmyterchuk  how this news was accepted by the team of CRH as well how this medical institution has been provided with oxygen previously. 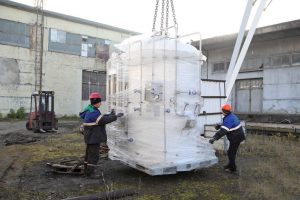 – With the aim of situation improve in the hospital regarding the provision of sick persons, and primarily persons on COVID-19 disease with oxygen, we applied at a certain time to the management of «KARPATNAFTOCHIM» with a request to find the possibility and to procure for us an import oxygen station, – says Ivan Olexiyovych. – We felt at once a positive perception and understanding of our problem from the side of petrochemists. And next day General Director Deputy of the Company Yarema Rudyk informed us, that to specialists of respective divisions was given the instruction to investigate this issue and to propose different options of its solution. Shortly after that was signed the Agreement for delivery of oxygen station and paid money in the amount of almost million UAH. And at present by employees of our medical institution together with specialists of other organizations of our town is prepared the site of its location.

– It will be located near the housing opposite to the main  building of the hospital, where at present  there are four cryogenic cylinders for liquid oxygen storage with  holding capacity of 190 liters each, –continues Mykola Dmyterchuk. – From them the gasified oxygen is supplied to the divisions of the hospital. Due to a great current demand in medical oxygen and constant operation of cryogenic cylinders, often appear stoppages regarding its delivery to the departments, especially during switching over of oxygen supply from one to another.

What concerns a new oxygen station, its scope is three thousand 128 liters of oxygen, and that is four times more than the amount which we can store in four cryogenic cylinders.

It’s also worth to note, that according to currently acting scheme of oxygen supply, it comes to the divisions under pressure 12-13 atmospheres, because at supply in 15 atmospheres oxygen was frozen in the taps and reducers. And from a new oxygen station would be possible to supply it under pressure 20, 40 and even 60 atmospheres. 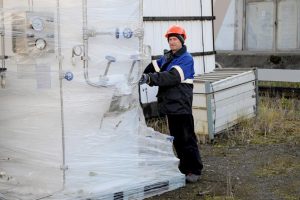 – It’s also important, – joins the conversation Ivan Krasiychuk, – that today for uninterrupted provision of  hospital with oxygen, we need 80-90 bottles per day, and after installation of a new unit we will supply  it once per 4-5 days, or, maybe, per week. Currently it is delivered from Lviv Chemical plant; we also rent from them the above mentioned cryogenic cylinders, and the need in them will disappear too.

On this occasion we hope that Kalush petrochemists will overcome all hindrances and will register the liquid oxygen of own production as medical agent, which could be possible to use for ill persons treatment. It’s known that «KARPATNAFTOCHIM» already has the corresponding license for production of liquid oxygen as a final product, so we really hope that in the nearest future we will treat ill persons with oxygen from Kalush enterprise.

And here for us is very important the financial aspect of this issue, because in the period of coronavirus infection for oxygen purchase we spend in average till 250 thousand UAH per month, while according to the information of  Yarema Rudyk, «KARPATNAFTOCHIM» will supply it to us gratis. We could use saved money for other urgent needs of our institution, including its medical securing.

In order to help petrochemists to solve all these organization issues, we applied to Vitaly Fedoriv, the Governor of our region, for his assistance in this action. Apropos, the issue of provision of medical institutions with oxygen, I mean not only our hospital but the whole Precarpathian and Ukraine, is at present so important that it was discussed at one of the last sessions of the Government, and corresponding decisions were taken regarding this issue.

On the photo: oxygen station at the territory of the Enterprise, and in the nearest days it will be delivered to Kalush Central Regional Hospital.