Due to the fact that Kalush, along with nine other cities and eleven regions of Ukraine, fell into the “red” zone in terms of epidemic danger level, on the territory of which public transport is prohibited, company “KARPATNAFTOCHIM” promptly has taken measures to restore the transportation of employees to and from work by additional regular buses of carriers. 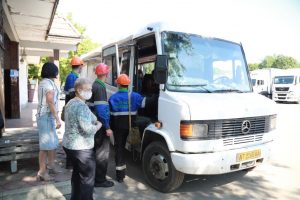 – Since the new epidemic zoning come into force from 00:00 on August 31, we made sure that from that day on, employees of the enterprise could easily get to work and return home from work, – commented the head of wages and social programs department of “KARPATNAFTOCHIM” Ihor Melnyk. – As at the beginning of the strict quarantine, which was introduced in Ukraine and did not weaken for a long time, the enterprise has now again agreed on separate agreements with the auto enterprises “KALUSH-TRANS” and “LUX TRANS” on the provision of services for the transportation of workers both from the villages of the Kalush region, and from the city of Kalush by additional regular routes.

Coordinating with the carriers the bus schedules, we also took into account the fact that, according to the decision of the city commission on technogenic and environmental safety and emergencies in Kalush, starting from Monday, August 31, regular special buses were introduced to transport workers to critical infrastructure facilities from 06:25 until 10:00 and 16:00 to 19:00 within the limits of the number of seats on the routes and public transport schedules in force in the city. Some petrochemists can also use their services for the period until Kalush leaves the “red” zone, the lists of which we will prepared and submitted by September 4 to the economic development department of Kalush city council. But I think that there are not many such workers at “KARPATNAFTOCHIM” who will also need to use the services of such special buses. As, the schedule of buses compiled by us with carriers with additional buses from villages and cities allows both day and shift staff to get to work on time and return home.

Ihor Melnyk also stated that due to referring the city of Kalush to the “red” zone of COVID-19 spread epidemic danger, measures for disinfection of premises have been strengthened. For this, sodium hypochlorite of own production, “Blanidas” solution and other means are used.

The face mask regime remains valid at the enterprise. Every week, employees are given two or three protective disposable face masks per day, depending on the length of their stay at work. The canteen on the territory of KARPATNAFTOCHIM Ltd. does not work, but they continue to prepare takeaway meals for petrochemists in disposable dishes