Within the period from June 15 till 19 in the hydrocarbons filling division of ethylene and polyethylene production facilities of «KARPATNAFTOCHIM» LTd, were made important activities of access tracks repair. 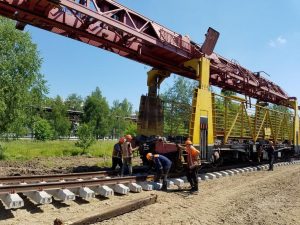 A journalist of newspaper «Naftohimik» took interview from a Chief of department of buildings, structures and industrial objects of «KARPATNAFTOCHIM» LTD Volodymyr Stefanuyk concerning the issues -which works were done and by whom.  .

– I’d begin from the fact, – tells Volodymyr Vasylyovych, – that we started activities for railway tracks repair on the territory of ethylene and polyethylene facility last year. But a main task for the renovation of tracks of railway unit, namely the repair of access tracks to pipe racks from the station «Himik-Novy», was planned for this year.  Pursuant to the respective Order of Ivan Pidsadyuk, General Director of the enterprise, all repair activities on sections of access roads are foreseen to be done in two stages. The first stage was successfully finished at midnight of June 19.

As for the executors’ choice of these activities, their specific was taken into consideration, as well as the necessity of reliable performance to optimal terms, considering the production requirements of the enterprise regarding the provision with raw materials and shipment of final products to the consumers. For this purpose was decided to conclude a corresponding Agreement with JSC «Ukrzaliznytsia», which has in its structure specialized subdivisions for dismantling of the old sectors of rails and installation of the new ones as 25-meters of rail-sleeper lattices.

The choice of this executor was because this is a sole Firm in Ukraine, which has a great experience of such works execution. It fulfils such activities constantly, can organize and foresee everything pretty well, and that is why they met our requirements to perform these activities to optimal terms. 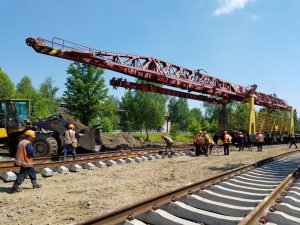 So within four months we fully dismantled the existing support under rails, wooden sleepers and renovated the rails at a few sectors with the substitution for total length of 775 meters. In order to fulfil these works JSC «Ukrzaliznytsia», used a powerful railway crane which lifts and dismantles old rail constructions, as well as auto-train that supplied rail-sleepers lattices, hopper-dosing wagons, correcting- straightening machine, bulldozers and fork-lifter. All this equipment was provided by the executor of works.

– Were all planned works performed?

– Main part of foreseen activities has been done. The rest job is to be performed by analogical method and with involvement of teams from JSC «Ukrzaliznytsia»- this is to substitute some sectors of   tracks with total length of 500 meters in the above-mentioned hydrocarbons filling division. We plan to start these activities in the morning on the 24th of June.

Mykola Homa, Chief of railway facility told us about the reason of repair jobs of access tracks.

– First of all those activities were planned with the aim to secure a reliable operation of our moving stock and timely loading of final products and unloading of naphtha, gas mixtures and other kinds of raw materials – he tells. – Workers of the unit by their own efforts were maintaining in a proper condition the access tracks and tracks which are located under the pipe-racks, but during long period of operation the foundation under rails as well as some existing wooden rails have been essentially worn and badly needed  a substitution for new ones, made from reinforced concrete, which currently were installed pursuant to new technologies. And this will in its turn secure larger manoeuvrability of our moving stock, and due to that will save time during loading-unloading activities performance. So taking the opportunity, I would like to express thankfulness to the Management of our enterprise and to Supervisory Board that supported the initiative of such activities performance.

On the photo: workers of JSC «Ukrzaliznytsia», are performing jobs for mounting of new rail-sleepers lattices.