Ivan Pidsadyuk: “I am especially pleased that the company is stable for the fourth year in succession after a long downtime.”

LTD Karpatnaftochim > News > Ivan Pidsadyuk: “I am especially pleased that the company is stable for the fourth year in succession after a long downtime.”

Ivan Pidsadyuk: “I am especially pleased that the company is stable for the fourth year in succession after a long downtime.”

The year is over, which was difficult for both Ukrainians and the population of the planet and rich in events that affected people’s lives, made their adjustments.

The year 2020 was no exception for the team of the largest not only in Kalush, but also in Ciscarpathian enterprise “KARPATNAFTOCHIM”. Although an interview with its CEO Ivan Pidsadyuk was arranged in advance at the end of the year, our conversation actually took place on New Year’s Eve and touched on the company’s work last year, its prospects, and also those that had a direct impact on its activities. 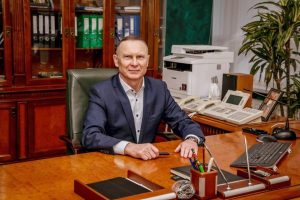 – First of all, Mr. Pidsadyuk, what was 2020 like for the company? What made you happy and what upset you?

– It is gratifying that, despite all the difficulties, “KARPATNAFTOCHIM” has significantly increased production, which has expanded the geography of the market and, importantly, the products did not lie too long in warehouses. I am especially pleased that the company has been operating stably for the fourth year in a row after a long downtime. Although, analyzing the past year, it should be said that it was not easy for our company, as, incidentally, for most petrochemical complexes in the world.

At the end of 2019, we faced a sharp rise in prices for our company in the market of hydrocarbons, which made its economy unprofitable. And then there was the collapse of prices for polymer products, including polyethylene and polyvinylchloride resin. And in this situation, the Supervisory Board and management of the company considered various options for the company, including stopping its technological plants and switching over them to idle mode. And in November-December 2019, the demand for polyethylene fell down on the product market. Therefore, we were forced to stop the plant of its production on January 1, 2020.

So, given all this, the beginning of the year did not promise us anything good, because all our economic calculations in that situation showed losses, and this meant a complete shutdown of the enterprise.

– What caused these troubles, why did product prices fall?

– This situation was caused by the global economic crisis, which was largely caused by the COVID-19 pandemic. And no one knew how to work in such previously unknown conditions. At that time, there was a sharp fluctuation in prices on the market both for the feedstock, in particular oil, and for finished polymer products. It was necessary to think, analyze and take the necessary measures.

And in this situation, the Supervisory Board and the company’s management took urgent measures to find new markets for both feedstock for production and for the sale of finished products. After all, many companies in the world, with which we had partnerships, at that time either stopped or reduced production. In KARPATNAFTOCHIM, a strict regime was introduced to save material resources and reduce all costs, including through personnel optimization. In order to fulfill these tasks, the management of KARPATNAFTOCHIM, its main specialists, held a large number of online meetings with members of the Supervisory Board of the company on the organization of work in the new conditions.

Summarizing the above, I believe that the most difficult for the team was the period from December 2019 to April 2020, because this time we have already begun to enter a stable mode of operation of all plants, including the production of polyethylene, which was put into operation again.

– Everyone knows that petrochemists from Kalush not only fought the pandemic at the enterprise, but also helped town citizens of other enterprises and organizations.

– This is true, because we had both the desire and certain opportunities for this. The fact is that we produce such a very effective disinfectant as sodium hypochlorite. We not only use it for disinfection of premises, buildings, but also provide charity to municipal and other enterprises of Kalush, medical institutions and all those who need this chemical compound. We did not refuse anyone.

In such a difficult period for all of us, the company started the production of liquid medical oxygen, fulfilling all the necessary procedural and organizational conditions for obtaining a license and registration of this product. And today I am very pleased that in December we have already delivered to medical institutions more than 100 tons of liquid oxygen, of which 40 tons for our Kalush Central District Hospital. And for the purpose of medical oxygen stable supply to patients in the hospital ward at the expense of the enterprise a modern cryogenic oxygen plant was purchased for the hospital in Pidhirky.

– Let’s return, Mr. Pidsadyuk, to work of the enterprise in 2020. After all, in addition to the fact that in the conditions of the world economic crisis and pandemic the enterprise worked, in its production plants the scheduled shutdown overhaul was carried out.

– Such overhaul was expected, because for the first time in the history of our enterprise we worked without it for two years. Therefore, the technological units required shutdown and performing very responsible repairs. Today, I think, it is no longer expedient to talk about whether the decision was right when, during both the economic crisis and the spread of the pandemic, production plants has been shutdown. After all, first of all, we needed overhauls. And secondly, we very competently calculated everything, including terms of the shutdown, and a set of those important works which necessarily had to be executed.

The complexity of the overhaul was that the world continues to live in a pandemic, which created considerable difficulties with the supply of necessary materials, equipment, spare parts. Therefore, of course, we experienced some difficulties, given that in Ukraine there are still very few companies that can fulfill our orders.

I would also like to say that for the first time during the last overhaul, we introduced daily operational meetings at the production facilities in the so-called walking format. They were attended by the heads of the enterprise, its main services, who, being on the territory of one or another structural unit, personally assessed the progress of the work, learned about the problems that exist, which were then solved.

The peculiarity of the shutdown overhaul in 2020 was that it lasted only 21 days, while in 2018 – 40. At the same time, the important and high-tech work in the cracking, compression and separation of cracked gas department, hydrocarbons production, chlorovinyl production, chlorine and caustic soda by membrane method, PVC resin suspension, air separation was performed in the no less volume. Therefore, I consider our common great success that we carried out this repair, put the plants into operation on time, and now they are operating at the necessary loads. Tasks carrying out during the overhaul for updating and modernization of equipment should ensure the reliable operation of the enterprise during 2021-2022.

– What still concerns you as the manager of the enterprise, can you especially mention someone for his/her contribution to the overall successful year for the team?

– I will say that all employees of the company have confirmed their professionalism and reliability in such a difficult year for us in 2020, and therefore I want to sincerely thank them for it.

And regarding the concerns, I am still concerned that we are living and working in conditions of an economic crisis, a pandemic, which could lead to new unforeseen events. And our team cannot be outside such a situation. So, speaking of the coming year, I would very much like all our production plants to continue operation on those loads that ensure the profitable operation of the enterprise.

– At the end of the conversation, Mr. Pidsadyuk, what would you like to wish the employees of the team and how do you plan to celebrate the New Year 2021?

– I wish all our employees, their families and kins, above all, good health, well-being, peace and confidence in the future.

I will meet 2021 in the family circle together with the families of my daughter and son, with my grandchildren, whom I already have two.