In the cabin of locomotive driver is a comfortable microclimate

In the cabin of locomotive driver is a comfortable microclimate

To Locomotive Park of the railway division of «KARPATNAFTOCHIM» Ltd. had recently returned the first diesel locomotive, which was substantially repaired this year in factory conditions; and maintenance personnel from Zaporizhzhia on the request of the enterprise created comfortable conditions for work of locomotive team. By this performed activity, without exaggeration, are extremely satisfied drivers and drivers assistants, who during the shift must stay there and work.

– Per each eight diesel locomotives, which are at present used around-the-clock for shunting transportations via tracks on the territory of the company as well as to railway station Rozhnyativ and back, are appointed four locomotive teams, – tells Mykola Pavliv, railway division Chief Deputy on technical issues –But according to regulations and norms of «Ukrzaliznytsia» at its main tracks of general use should not be allowed for transportation to stations and back wagons with products or other goods, i.e. such traction units of the enterprise, which have not been timely substantially repaired or if their state does not correspond to the requirements regarding traffic safety. That is why we strictly stick to these norms and regulations as well as observe effective laws, concerning freight transportation by railway transport. Scheduled-preventive –maintenance of diesel locomotives, which we operate, are constantly performed by our own forces at locomotive depot of railway division; and we entrust their capital repairs only to specialised firms with good reputation.

According to information of M. Pavliv, this year for the first time the diesel locomotive was sent for overhaul to the firm «Locomotive-postach», with foresight in the Agreement the repair of apparatus, devices and other control units in the cabin of a driver, creating there a comfortable microclimate for locomotive team work. The performers made everything timely and efficiently. They have substituted old windows in the driver’s cabin for modern glass plastic ones, installed air-conditioner, microwave and refrigerator. And now it’s really pleasant to work there for a driver and his assistant. 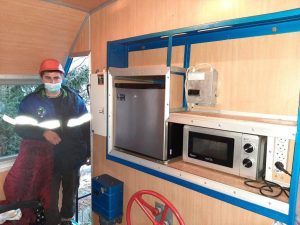 Mykola Pavliv also informed that in the second decade of November to the firm «Locomotive-postach» was sent the second diesel locomotive of railway division of «KARPATNAFTOCHIM» Ltd. for capital repair and comfortable microclimate creation in the cabin of a driver. In accordance with the Agreement this job should be made by maintenance personnel within 90 working days. And in  the future the railway people plan with financial assistance of Management and Supervisory Council of the enterprise step by step to modernize the cabins of drivers and to repair substantially all other diesel locomotives, which are used for transportation of goods to the railway station Rozhnyativ and back.

On the photo: in the renovated cabin of diesel locomotive