Control panel of the Unit is as the command post

Control panel of the Unit is as the command post

There are such places in each inhabited locality that best of all and without further ado covey its atmosphere and customs. And these are just the places you usually suggest your guests to visit and frequently also visit them by yourselves. 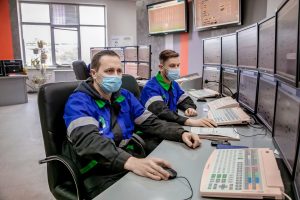 And working at the enterprise «KARPATNAFTOCHIM» for a long time, I can safely say that one of such locations which confirm the   modernity and complexity of processes and hereof a high level of professionalism of employees, is Central processes control panel of divisions for hydrocarbons output, cracking, compression and cracking gas splitting of ethylene and polyethylene production facilities. And though production workers use such name seldom and mostly call it shortly «control room» or CCP, it surely does not diminish the importance of this  peculiar «brains» of the Unit in the technological process of products output.

It was also confirmed during our conversation by Ivan Fedoriv, a chief of ethylene and polyethylene facilities.

– Control panel of these two determinative divisions of the Unit is our command post, – tells Ivan Mykhaylovych. – Right here are accepted the responsible decisions regarding the technological process control, as well as are inserted the corresponding corrections. Besides the process personnel of the shift, and namely: five field operators of the sixth rank of pyrolysis division, two field operators for hydrocarbons output as well as a shift foreman, this place is often visited by managers, specialists of our facility and specialists of the enterprise.

Ivan Fedoriv also told us that it was the time when the guests of their control room were Presidents, Prime-Ministers of Ukraine, as well as ambassadors of foreign countries and other very important persons. High-ranking officials like to be amazed by the latest technologies and the control room of ethylene facility is the best illustration of this.

Till the year 2013- that is before the beginning of a long outage at «KARPATNAFTOCHIM», the automatic processes control system was carried out at the equipment of German company Siеmens. But within the outage period all required activities had been made concerning the substitution of that already outdated system for a more modern one of the Japanese company YOKAHAWA, which was successfully put into operation during enterprise commissioning in June, 2017. 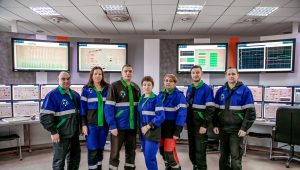 Mykhail Psuk, a chief of cracking, compression and cracking gas splitting division is satisfied by a new automatic system of processes control, which had already been mastered by his subordinates. He also noted that:

«Control system is now much more modern and the corresponding working conditions for process personnel in renovated control room were also created, but not everyone can fulfill the set tasks. Responsibility is really high. The job of operator requires knowledge at the level of a qualified engineer that must also have a respective job experience. That is why we pay careful attention to the issue of staffing of this division».

…And although it’s winter outside and the weather is almost every day changeable, in the control room of Ethylene Unit is everything always stably: operators, sitting in comfortable chairs, keep eyes on large displays, on which every now and then appear the operative information that must be timely noted and properly responded.

in the Unit control room -the team of senior foreman Yaroslav Chornyi.