Long-distance product pipeline facility is an extremely important subdivision for «KARPATNAFTOCHIM» Ltd. Among targets of the team of this facility there are such as: the securing of technical operation of ethylene receiving and pumping station from ethylene pipeline «Kalush-Western Border» and diesel fuel via the long-distance product pipeline «Drohobych-Kalush», as well as acceptance, storage, transportation and record of raw materials and products (diesel fuel, ethylene) in the specified volume, nomenclature and range.

And these uneasy tasks should be solved by the team at the ethylene pipeline with the length of 204 km and at the main product pipeline which is more than 84 km long.

And some time ago the workers of the sector of the emergency-repair works under the leadership of facility Chief deputy Ruslan Mykhaylovych have made the repair of the area of ethylene pipeline «Kalush-Western Border» at the edge of the village Odynytsia, Dolyna region, which became necessary as the result of recent floods. 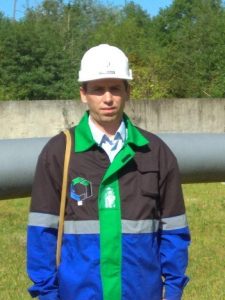 – On the territory of Ivano-Frankivsk and Trans-Carpathian regions from time to time similar repair jobs  are to be done at the ethylene pipeline  with the aim to prevent the probable emergency situations, because this pipeline is going through rivers and mountain areas, where dangerous  exogenous geological processes could take place, namely floods and other negative phenomena, – stresses Ruslan Volodymyrovych. By the Government Authorities is applied the intensified attention to this object of increased risk. That is why the workers of our facility, while securing the operation, maintenance and repair of ethylene pipeline, should do their best in order this pipeline always stays in technically good condition. All these targets are secured by the teams of three sectors of the facility, namely: emergency-repair works, maintenance of long-distance product pipelines and electro-chemical protection of the underground conduits. Only, if large in scope and specific activities are to be made at this object, the Management of the Company involves specialized organizations.

As is well known, within June 22-24 this year, the territories of Ivano-Frankivsk and Lviv regions were under the effect of the cyclone, that caused heavy pouring rains, and this in turn caused a sharp increase of water level in mountainous rivers of Dniester basin.

In early July, 2020 by the commission of the Company with involvement of leading specialists was carried out an extra planned inspection of air transitions at the product pipeline «Drohobych-Kalush», and in the second half of July this year, through the own efforts of the team of the facility, under the leadership of Chief of this sector Zenoviy Kohan were executed the activities of purifications of air transition supports at the river Striy of product pipeline «Drohobych-Kalush» against so called «sails», which could appear on it ( i.e. trees and shrub vegetation).

Considerable scope of repair works was also performed this year on the ethylene pipeline. Here the workers of emergency-repair sector made the protection of pipeline areas against mechanical damages, performed the repair of plug valves and renovated the fencing of linear crane platform for 109 km of the route.

And such uneasy tasks due to natural disasters must be often solved  by the employees of our facility in recent time, as well as they should perform other important works without the support of the outside companies, saving in such a way the expenses of the Company.