And at family table they all become railway people

And at family table they all become railway people

Upon my request to meet with such family, where profession of railroader is passed from generation to generation, a Chief of Railway division of «KARPATNAFTOCHIM» Ltd., Mykola Homa sincerely smiled: 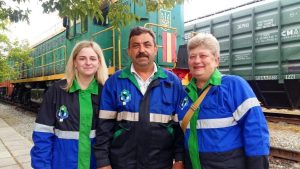 «You know, your words made me to muse, because at present we have a dozen of such labour dynasties, and they all deserve the readers to find out the information about them from newspaper columns. So for instance, for many years has been working in our team the Yakovyna family. Today this labour dynasty is being continued by sons Volodymyr and Yaroslav and by daughter Natalia.

Not less significant, concerning the number of employees that work at present and who worked previously here, is the Sondey family. Apropos, they all are at their working places today and you can meet them.

The head of the family –a locomotive driver Mykola Sondey, has just handed over the shift, and his wife Oxana Ivanivna – inspector of the goods and their daughter Hanna Luzan (family name of her husband) –a specialist for accounting and dispatcher activities), only started the job.

But still our meeting, with the support of a Chief of division, took place.

– In our family, – tells Mykola Mykolayovych, – to labour dynasty of railway people belong relatives of my wife – the Ananevych family. – In the past at Railway amalgamation «Chlorvinyl», and later «Oriana», worked her parents and also two elder brothers. And from my part-only my mum worked there.  And though a wife and her relatives often joke that I, so to speak, was only attached to their dynasty, but frankly to say, from my childhood I  was cherishing dreams to become a locomotive driver.

In my further conversation with the Sondey family I got to know, that Mykola Mykolayovych was born in the village Kropyvnyk. And the proximity to railway station, a constant feeling of rails and movement of cisterns and wagons arouse the desire to become a railway worker. So after the graduation from the professional college in Striy and military service, in the year of 1988 he got a job at Railway amalgamation; at that time it was named «Chlorvinyl». Firstly he worked as a helper of a driver, and after graduation by correspondence study from the technical college in Dneprodzerzhinsk, pretended on the position of a locomotive driver. And he received this position 15 years ago. And there, in the team of Kalush railway workers he met his future wife.

– And though I consider myself to be a Kalush dweller, because I live here a major part of my life, but in fact I was born in the isolated farmstead Kepske, which does not exist more; at present a wallpaper factory «Vinisin» and other enterprises are located there, – tells Oxana Ivanivna. – With construction start of the wallpaper factory by a company from Yugoslavia in 90th we were given a flat in the town of Kalush.  And we lived there and raised our family. Besides Anya, we also have a son Vitaliy. They both have already their own families, and I with Mykola live now in his parent’s house in Kropyvnyk.

I graduated from Dnipropetrovs’k institute of transport, so I was aware beforehand that my labour activity will be started in the labour collective where my parents worked. But when I got acquaintance with my husband and we married, and then children were born, my main attention was paid to a family… For the sake of my family I had to forget about all my plans regarding the career and so on. But I don’t regret that something in my life had gone not like it was planned before. And I am really happy, because I have a loving husband, kind children…

And though my son, his wife, by the way, she also has a name Vitalia, and a husband of my daughter Anya, named Volodymyr, are not directly related to the work of railroaders’ team, they all are well acquainted with a topic about  working days there.

– Although we do not have at present a large housekeeping  in the village, – tells Mykola Mykolayovych, – but still mostly we gather with a whole family in the village Kropyvnyk. – We love to make a fire in our yard and to fry kebabs. And then we often, so to speak, together with a whole family, become railroaders…About such meetings are well informed our neighbors, relatives, so occasionally they drop in to us. How fine and lovely is then for all of us!

Being in the company of these sincere and hard-working people, I came to the conclusion that due to such families and relatives our society is getting stronger and the nation unites… And due to this it became fairly easy and cosily for me too…