Mykhailo Kyzymyshyn, the chief of the air separation unit of S-PVC and CS plant, in its interview with NK in August this year spoke about the need of such work during the scheduled shutdown repairs of the production facilities of KARPATNAFTOCHIM Ltd.

At that time, in particular, he noted that the replacement of the turbine expander control system – which has been in operation for a long time – would be the most important repair planned to be performed in the unit. 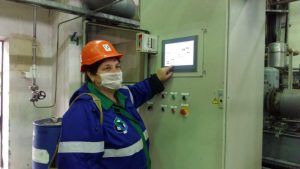 Visiting the unit on November 4, I saw at a glance the presence of service technicians of contractors. By the overalls labels, I realized that they were the representatives of the specialized company “TECHNOLOG” from the city of Sumy, which is a long-standing partner of the Kalush company and specializes in the inspection and repair of compressor equipment. Specialists from KARPTANAFTOCHIM instrumentation department, headed by deputy head of this unit – Mykola Mazur, were also present. He commented on the progress of replacing the turbine expander control system.

– The current system Simatic S5 from the German company Siemens, – says Mykola Bohdanovych, – has been in operation for about 25 years, and therefore, of course, is both morally and physically obsolete. It is its wear and tear, as well as the lack of spare parts on the market, that led to the shutdowns of this machine and, accordingly, the entire air separation unit. Therefore, the company management decided to purchase a new control system for the turbine expander manufactured by the same company Siemens, but the latest model.

The contract for its supply and replacement was signed in early August. For all this time, the specialists of the chief metrologist department of the company and the air separation department had been preparing to perform dismantling the old system and installing a new one. The equipment was supplied to us by TGE SYSTEM LLC from Ivano-Frankivsk, which also manufactured accessories, programmed the controller and control panel. Specialists of the engineering support and programming team together with the employees of the section 1 of the instrumentation department took part in the acceptance and commissioning of new equipment. In total, the department personnel were given four days to perform these tasks, but we completed them in less than two days. This was achieved primarily owing to proper preparation for these activities, as well as skilful and qualified actions of specialists who not only replaced the old control system of the turbine expander, but also adjusted its operation before installation, and then checked the operation of the devices.

I would also like to acknowledge the high level of knowledge and skills of the specialists of TGE SYSTEM LLC, who, by the way, will start the system after the completion of all repairs in the air separation unit. 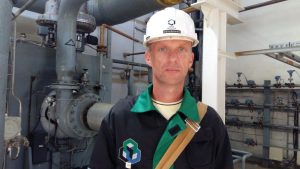 I asked Mykhailo Kyzymyshyn, the chief of the department, to describe in detail what scheduled repairs have already been performed in the department and when it is planned to put the unit into operation.

– I would like to add a few more words regarding the introduction of a new turbine expander control system, which is a new version of Siemens, – he said. – First of all, the replacement of the current system was anticipated for the department staff, and we are all very pleased that it has already happened.

Among other important ongoing activities in the department, it should be noted those carried out by specialists of TECHNOLOG company, i.e. diagnosis of bearings of our three compressors – oxygen, nitrogen and air. Initially, the measurements of bearing clearances were taken on the oxygen compressor, which was shut down together with the vinyl chloride unit, and now staff from Sumy together with our specialists take measurement on nitrogen compressor and have already started measurement on air compressor.

The purpose of these activities is to determine the dimensions of the bearing clearances in the compressors, so that the TECHNOLOG service technicians could restore the existing bearings. It is no coincidence that this high-profile task was assigned to service technicians from Sumy, as they have repeatedly proved their expertise at various production facilities of our company. Particularly, this summer they repaired the turbine expander at high quality standards and in a timely manner.

In addition, during the shutdown repair, the process personnel of the department performed a considerable amount of work associated with the inspection and cleaning of equipment, oil changes and more. One of the local entrepreneurs performed the evacuation of two oxygen tanks.

As for the start-up of the unit, I think that on November 5 we will be able to begin it.

In the photos: Oksana Onyskiv, the operator of the air separation units of the department, at the new local control panel of the turbine expander.

According to the agreement with Management of «KARPATNAFTOCHIM» Ltd., in November 10 with familiarisation visit at the enterprise was a delegation of Chemical producers of mineral fertilizers of nitrogen group OSTCHEM, headed by its director Sergei Pavlyuchuk.             After the safety briefing for the representatives of the delegation, which included, in addition to the heads […]

As previously reported, the team of ethylene and polyethylene production facility from «KARPATNAFTOCHIM» Ltd was the most actively involved in the vaccination campaign to prevent the spread of Coronavirus. Here, in the second decade of this month, they were the first to overcome the so-called vaccination threshold of 80 percent. As of November 4, in […]