With the aim of infection spreading prevention Kalush petrochemists daily ship dozens of tons of sodium hypochlorite to the address of different Ukrainian towns and enterprises.

LTD Karpatnaftochim > News > With the aim of infection spreading prevention Kalush petrochemists daily ship dozens of tons of sodium hypochlorite to the address of different Ukrainian towns and enterprises.

With the aim of infection spreading prevention Kalush petrochemists daily ship dozens of tons of sodium hypochlorite to the address of different Ukrainian towns and enterprises.

When in March, 18 by the Management of «KARPATNAFTOCHIM» was made the decision about the charitable providing for the needs of Kalush Municipal Council three tons of sodium hypochlorite, the disinfecting agent for buildings treatment, their indoors and even streets,  just after that a number of those who wish to obtain this agent considerably increased. 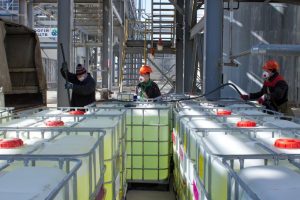 As it was informed to the editorial staff of «NK» by a chief of Chlorine and Caustic Soda Production Process via Membrane Method of PVC-S and CS Production Facility Volodymyr Olenych, now every day workers ship this product for communities as well as for enterprises of Kalush, Ivano-Frankivsk region and to other cities of Ukraine.

– For instance, – tells Volodymyr Stepanovych, – On 24th of March 20 tons of the above-mentioned product were shipped by us for needs of the city Ternopil. – But mainly we provide this agent for Kalush utility and industrial companies and for enterprises of our Ivano-Frankivsk region.

The only issue that could impede the shipping process of sodium hypochlorite is the lack of corresponding containers.  Before this time we were mainly loading the disinfecting agent in 1t IBC containers. But at present they are not enough, and we really need them for shipment of final products, namely polyvinylchloride.

In more detail about geography of supplies of this, somewhat forgotten disinfecting agent, named «Bilyzna», and popularly known as – «Kalyshanka», told to the journalist of «NK» General Director Deputy Yarema Rudyk.

– Just after quarantine imposition to the address of our company started to apply the managers of towns and enterprises with the request to supply them our sodium hypochlorite for disinfection of premises and buildings. And we try our best in order to satisfy these requirements, because this is about health and life of people, – accents Y. Rudyk. –

I don’t want to go into details how much of this product has already been shipped by us; I will simply name the addresses of delivery. This is, in particular, Ivano-Frankivsk Regional State Administration, Municipal Council of Kolomyia, Cement-Slate Complex in Yamnytsya, State Emergency Service in Ivano-Frankivsk region, United Territorial Community in Broshniv-Osada  and Verchnya, Kalush Power Station and a number of other enterprises of Kalush. Total amount of this disinfecting agent, which had been supplied as at March, 26 is more than 100 tons.

Taking into consideration a complicated situation, connected with spreading of coronavirus infection, our company will further explore all opportunities for rendering of such assistance.