Vasyl Hromyak: “It’s a matter of great satisfaction that our production unit provides perspectives for development of the enterprise»

LTD Karpatnaftochim > News > Vasyl Hromyak: “It’s a matter of great satisfaction that our production unit provides perspectives for development of the enterprise»

Vasyl Hromyak: “It’s a matter of great satisfaction that our production unit provides perspectives for development of the enterprise» 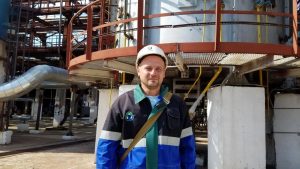 Very often I witnessed conversation on the topic which subdivision of «KARPATNAFTOCHIM» is the most important for the enterprise. Certainly, specialists-petrochemical workers may give answer to this question that all production units and all production facilities are very important for petrochemical complex because they all work in a single process chain. However, in some aspects the availability of one or another structural subdivision is especially significant for the enterprise.

Vasyl Hromyak, a chief of hydrocarbon output of ethylene and polyethylene production facility, is also persuaded in such statement.

– Uniqueness of our production unit, where I have been working 20 years, – tells Vasyl Volodymyrovych, has recently been more and more observed. It means that at a deeper processing of such hydrocarbon products as С4, С5, С9, С6-С8 cuts, are developed our ethylene and polyethylene production facilities in particular, and the enterprise «KARPATNAFTOCHIM» in total.

After olefins production start-up in the year 1986,  later as a part of our production unit was put in operation the unit of benzene production – the product which both in Soviet times and now at present has a wide use for synthetic fibres production, plastics, dyes and other products of organic syntheses, as well as  is used in pharmaceutics. Main raw material for benzene production is our fraction С6-С8. And in the year 2005 was constructed and put in operation the production facility for С4-С5 cuts hydrogenation.  I want to underline that the efficiency of this investment project has been already confirmed in the first year of unit operation. It works in such a way that the by-products, which are formed during cracking process of production of such main products as ethylene and propylene, are sent to hydrogenation unit and after that are coming back to technological process.

And our recent success for deeper cuts processing is propylene oxide unit that was built within last two years. During this short period of unit construction was passed the way from the idea of project implementation till products output that is in demand at the market and which will favour the economy strengthening.

Listening to the emotional narration of a chief of the production unit about working team and future perspectives, I just wanted to know something about his working career.

– I started my working activity in the team as the fifth category operator after graduation from Ivano-Frankivsk National Technical University of Oil and Gas, where I got specialty mechanic – tells Vasyl. –In one year I began to work as a senior shift foreman.

And then, working at the engineering position and having new obligations, I had to get the education of chemic-technologist. For this target I studied and then in 2008 graduated from National University «Lvivska Polytechnika». And really to a large extent such retraining helped me to receive a position of a chief foreman of the division. Later I began to work as manager deputy on process issues and in 2013 I was appointed to be a chief of the production unit.

In our conversation we also spoke about the cooperation between teams of hydrocarbons production and cracking, compression and cracking gas splitting.

– We, so to say, are working in one holder, – emphasizes my interlocutor, –  we have a joint control room for technologic processes management, and we interact closely regarding the issues of processes management. To a great extent operation of our units that are specialized on liquid fractions processing is dependent upon the process of main products output, i.e. ethylene and propylene, which are produced by a team of pyrolysis, compression and pyrogas splitting units.

– How does your team perceive such strategy that development of the enterprise will be realized on the base of their production unit?

– Sure we all are encouraged. We understand that there are potentials for development; specialists of our enterprise and specialists from other firms and from scientific-research institute are working in the direction of innovations. The purpose of perspective projects is, so to speak, to draw from our fractions more and more final and competitive products. And we are happy that our production unit also provides to the enterprise perspectives for development.

During our conversation was also raised such important topic as staff capacity of the collective, because we all know that in the period of 2012-2017 was the forced outage.

– Due to outage period we lost almost the third part of working personnel, – says Vasyl Volodymyrovych, – but the backbone of the collective, its chief specialists stayed at the production plant and continue to work at present too. And after notification that the production unit should be prepared for start up again, was necessary to conduct a diligent and careful activity for  new employees selection. And I am in general satisfied with workers that joined our team in that difficult period.

For me personally and I hope that also for other our employees it’s a great pleasure to work in a team. There is mutual aid, friendly atmosphere in shifts, joint spending of weekends and festivities as well as much more positive moments in our team. And taking the opportunity, I’d like to express thankfulness to all our workers for their diligent work, understanding and support.

– However, employees say that even at the slightest process defects a chief of the production unit is promptly on the site in order to see with his own eyes, estimate everything and  introduce corrective adjustments.

– In some way they are right, but it does not mean that I don’t trust my deputies or operators. There was time when I was one of the youngest engineer-technical workers and was responsible for the important part of operation. And now, when I am among the most experienced I feel the need to keep further everything under control.

– Vasyl Volodymyrovych, – emphasizes a manager  of ethylene and PE production facility, – is always in constant search for technological innovations, which promote the improvement of technologic processes and output of more qualitative products.

…Before my meeting with Vasyl Hromyak I also got to know that some weeks ago the third child was born in his family. So I congratulated him on this kind event and at the end of conversation asked a happy father about a newborn and about the whole family Hromyaks.

– Thanks so much for your greetings. Carolina, and this is the name that we both with my wife Natalia gave our second daughter, goes with us on trips for weekends to a grandfather (my wife’s father) to the village Porohi, located in Bogorychany district. We all go by car: my wife, elder daughter Lilia, son Andrei and a baby Carolinka.

And I myself was born in Lviv region, but when I was one year old my family moved to Kalush, where my father worked at potassium fertilizers plant and then was given the apartment from the company. And my mother all her life worked as a cook and continues to work at present as a cook too. That is why I, as a local Kalush person, like for a change to visit the motherland of my wife very much. We love to pick mushrooms, berries and simply to have a rest in our marvelous Carpathian Mountains. This is great and it relieves fatigue and industrial stress.

детальніше
Розповісти
Igor Dmytrenko: «It’s so good that in Precarpathian is the producer of such products, which currently save life…»
News

In November 2020 due to coronavirus infection spreading and when in Ukraine occurred serious problems with provision of hospitals with medical oxygen, the Management and Founders of  «KARPATNAFTOCHIM» Ltd. accepted the decision about the supply of this product to medical institutions. But in order the enterprise to be eligible for supply of such product as […]