Representatives of KARPATNAFTOCHIM Ltd. were awarded with the badge “Badge of Honor of the Merit for the Chemical Industry of Ukraine”

LTD Karpatnaftochim > News > Representatives of KARPATNAFTOCHIM Ltd. were awarded with the badge “Badge of Honor of the Merit for the Chemical Industry of Ukraine”

Representatives of KARPATNAFTOCHIM Ltd. were awarded with the badge “Badge of Honor of the Merit for the Chemical Industry of Ukraine” 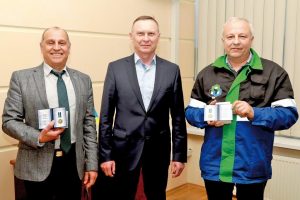 Two such awards on the occasion of the Day of the Chemist, which is celebrated in Ukraine on the last Sunday of May, at a meeting with the heads of production plants, services, departments and divisions of the enterprise on May 26, were awarded by the General Director of KARPATNAFTOCHIM, Ivan Pidsadyuk.

Badges from the Union of Chemists of Ukraine and the Central Council of the Union of Workers of the Chemical and Petrochemical Industries of Ukraine, were received by General Director Deputy of the enterprise in the town of Kalush Oleksandr Boletskyi and Manager of Ethylene and Polyethylene Production Plant Ivan Fedoriv.

The managers present at the meeting applauded their colleagues, and the General Director expressed the wish that the awards from the Union of Chemists and the Central Committee of Industry Association Union prompted them to new achievements in their work