In technological process of caustic soda and chlorine production facility a core role play membrane electrolyzers. The vinyl chlorine production – the main feedstock for PVC-S resin output depends upon their efficient operation. That is why a special attention is paid to technical support, maintenance, repair and operation of electrolyzers of chlorine and caustic soda production facility via membrane method by its team, by Management of «KARPATNAFTOCHIM» Ltd. and by Supervisory Council of the Company. 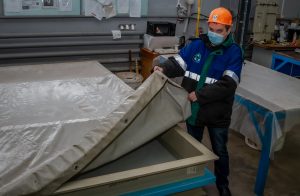 Volodymyr Olenych, a chief of the Unit, especially stressed the above-mentioned. He also informed that this week is planned to send to Germany the next lot of single elements of membrane electrolyzers (without membranes) for performance of renovation work at the specialized firm, which has a good reputation in Europe and in the whole world.

And continuing with the theme, which we began with a chief of this important structural division over the telephone, some other questions were raised. But Volodymyr Stepanovych apologized in a good form and told that he must hang up, because in a minute will be held a selector production meeting. And I decided not to wait for meeting completion, in order to continue the interview with a department chief as soon as possible after it, and together with a photographer visited the electrolyzer division.

And there we met Igor Tkach, a chief foreman (process specialist) of the Unit, who was explaining something to the workers. According to the new custom, we did not shake hands, but greeted each other by elbow bump, following the restrictive measures against coronavirus spread. And straight away I informed him about the purpose of the visit to electrolyzer division.  However I even did not manage to ask the question, when Igor Petrovych invited me to come with him to one of the big wooden boxes. I saw a few of them in the building of electrolyzer division.

– In such boxes, he told us, these cathode and anode half-cups will go to Germany to Company DE NORA. Their sets have already been packed in five boxes. And in the sixth box two couples of half-cups are missing for the full set. Their repair and defectoscopy is being made by qualified specialists in the workshop for technological equipment repair of PVC-S and Caustic Soda repair hall in a specially formed sector. I suppose that this job will be finished till Friday, the 15th of January, and then the workers of the workshop for single elements repair of electrolyzers, which is located in our division, will prepare these half-cups and will once more check the defects removed. So it could be possible on the same date to send the lot of electrolyzers single elements to Germany.

– Which jobs will be performed by German specialists, because according to your words, to DE NORA Company will go the sets of electrolyzers half-cups, which have already been repaired by specialists of repair division of our enterprise?

– Yes, we really repaired them at our own equipment that permits us to make some welding works, substitution of damaged sectors at electrolyzers half-cups, eliminate some defects, etc. But we have neither license nor such devices by means of which and  with compliance to corresponding process it could be possible to make renovation of the worn active layer of electrolyzer single elements coating, to liquidate pitting on cathode and anode surfaces, covered by composites on the base of oxides of precious metals – ruthenium and iridium. Only specialized firms can and are able to make the entire re-coating of electrodes which have license right and render such specific services.

At German Company DE NORA last year was made the re-coating of our two lots of anode and cathode half-cups for membrane electrolyzers. And after this action their efficiency was considerably increased.

– Which lot of single elements was currently prepared for sending to Germany?

–  It will take some time till they will be sent back from abroad. Whether the absence of such great number of important constitutive parts for membrane electrolyzers will influence on reduction of output scope and products sale?

– Currently all nine electrolyzers, and each of them consists of 132 single elements, operate on maximal rates. They all recommended themselves as effective, and correspondingly, the production scopes of caustic soda are not reduced. They correspond to the set planned indices. Besides, we can at any time, when it’s necessary, to switch off one or another electrolyzer and to install another single element or make substitution of the half-cup or membrane. We also have in reserve seven single elements that have already been renovated, as well as two absolutely new single elements that were bought last year. To say the truth, we must more often make the substitution of membranes, which have lifetime four years, but active layer of electrolyzers’ half cups according to passport information, can serve longer – till 8 years.