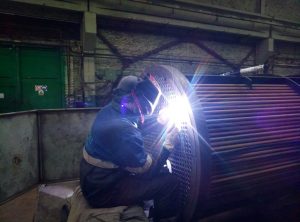 Team of the division for process equipment repair of ethylene and polyethylene plants besides many current works, which are performed primarily, since the beginning of 2021 has already repaired ten heat exchangers, not only different in purpose, but also in their structure.Moreover, several heat exchangers are planned to be repaired by the end of this year and for the first time in their activity are planned to be repaired two quench coolers.

– Ruslan Barnych, a chief of the division tells, – I’d like to emphasize that our team also makes repairs of heat-exchanging apparatus and other dimensional equipment from PVC-S and Caustic soda production facilities.  For instance, this year for VC production facility five heat-exchangers had been repaired. Four heat-exchangers from different units of the enterprise and two quench-coolers are at the time being in the process of repair.

I hope that till the end of the year, if there are no delays in the supply of pipes and other materials, as well as welders and fitters-repairmen will have less urgent work directly on the sites of ethylene and polyethylene production, 2-3 more heat exchangers and two quench coolers will be handed over in repaired state to the operational personnel. 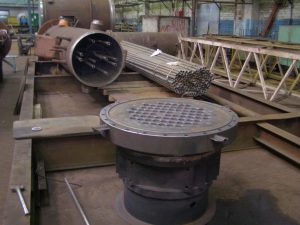 –If you have been repairing heat exchangers for several years and have mastered the details of this work right, the quench coolers till present were repaired at specialized factories. Weren’t you afraid to start this job?– These are really very complicated devices and at their repair the difficult technology of welding by means of argon welding machines is applied But we hope that our welders and fitters will cope with all the most difficult tasks and the result will be positive.Sure, at the beginning there were doubts whether to take on a new deal – mastering the technology of repair of quenching and evaporating apparatus.However, the staff of the shop obtained support of Denis Babyuk, a head of the production and technical department of our repair division and Vasyl Torkonyak, a chief welder of Repair Department. Previously they worked at «Techmash» plant, where quench coolers of our enterprise were repaired and even new were manufactured, and Denis Babyuk together with Vasyl Torkonyak participated directly in the above procedures. And Volodymyr Homenko, a chief of Repair Department supported the idea of quench coolers repair mastering. The staff of our workshop is really grateful for the practical help from these managers and specialists-experts in this field. Sometimes we all together discuss important issues and make a joint and the most optimal decision.

– Is the repair of quench-evaporating apparatus nearing the completion?

– We will gradually complete these works. We have already started the assembly of the first quench cooler. The second is still in dismantled condition, but will also be assembled soon.

All repair activities, included quench coolers, are being made under the leadership of the experienced foreman Ivan Solomud. In these works are involved welders of argon arc welding Olexander Vichisenko, Yaroslav Lopushynskyi, Volodymyr Vychoryk, Volodymyr Bodnarchyk, as well as fitters Vasyl Shevchuk and Ivan Kvych.