Recently on business trip in Turkey at the enterprises of petrochemical company Petkim was a group of specialists and managers of Company «KARPATNAFTOCHIM». 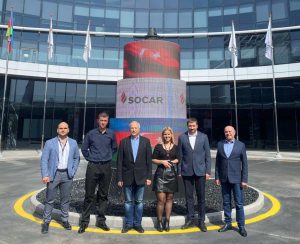 As it was informed by Ivan Fedoriv, a manager of ethylene and polyethylene production facilities and by Mykhailo Psuk, a chief of pyrolysis, compression and pyrogas splitting of the same production unit, the purpose of the trip was the acquaintance with work of petrochemical units of Turkey Company, particularly of ethylene, polyethylene and benzene production, which are also in operation at «KARPATNAFTOCHIM» Ltd.

According to information of Ivan Fedoriv the ethylene plant with capacity of 300 thousand t/y of Company Petkim was built in the year 1985, it means two years earlier than our plant. But within operation period it was modernized three times that permitted to double its capacity. For instance, it had been built two new cracking furnaces, were substituted pyrogas compressor and ethylene compressor, a number of other equipment was updated and the unit of С4 cut hydrogenation was put into operation; and apropos, such unit hasbeen installed and is in operation at our enterprise too.

– In order to ensure the proper operation of existing equipment we have implemented projects to modernize it, but the essential restructure of our plant has not been done yet, – continued Ivan Mykhailovych. – So the Management of the enterprise, its Supervisory Board have sent me with Mykhailo Psuk together with General Director Deputy on production matters Olexandr Boletsky and  Oleg Haluzynskyi – Adviser by Chairman of Supervisory Board to business trip to the site where ethylene facility is in operation for the acquaintance with already updated ethylene unit.

– There are no significant differences in the work of our unit and theirs, – tells Mykhailo Psuk, – because the processes of products production are identical. After presentation of all units, and namely, besides the ethylene unit, were presented three more units of PE output (two – low pressure, one – high pressure), aromatic hydrocarbons (our unit of benzene output), VC, PP, PVC. Presentations were proposed to our attention and presented to us by chiefs of divisions. To our request was given the opportunity to get acquainted directly with the operation of ethylene production plant.

I’d like to mention that the division of hydrocarbons output at Turkish enterprise is separated between the unit of aromatic hydrocarbons production and ethylene unit. During the visit to control room of the unit we noticed that due to coronavirus infection operators are separated from each other by plastic partitions. But when it comes about their control room in general, it looks narrower than others and does not impress with the design, although the factory premises, checkpoints are equipped with more modern equipment.– What we saw will, of course, be very important for us, –Ivan Mykhailovych continues the conversation. – We were interested, for example, how they manage to produce more propylene at the unit, while our equipment is adjusted to produce more ethylene. Other issues were also of a great interest for us, to which Petkim’s specialists gave comprehensive answers.

On the photo: Kalush specialists together with Turkish colleagues.