Organizers of charitable event and «KARPATNAFTOCHIM» have kept their promise.

LTD Karpatnaftochim > News > Organizers of charitable event and «KARPATNAFTOCHIM» have kept their promise.

Organizers of charitable event and «KARPATNAFTOCHIM» have kept their promise. 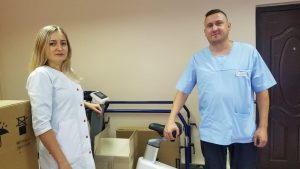 As it was already reported in local mass media, at the end of August was held a charitable event, on which more than 300 thousand UAH has been collected for a purchase of cardiologic device for communal non-profit making institution «Central Regional Hospital» of Kalush municipal council». And besides of that, 200 thousand UAH was charitably allocated by company «KARPATNAFTOCHIM» Ltd.

We would also like to remind that initiators of this event were people’s deputy of Ukraine Eduard Proshchuk, Head of Kalush regional state administration Zhanna Tabanetz and Management of «KARPATNAFTOCHIM» Ltd. After completion of the charitable event General Director of the company Ivan Pidsadyuk and his Deputy Yarema Rudyk announced that «KARPATNAFTOCHIM» had allotted 200 thousand hryvnia for the purchase of cardiologic equipment, necessary for Kalush Regional Hospital. Due to the fact that the cost of electrocardiographic stress-test system constitutes more than 450 thousand hryvnia, it was collected even more money because of lots sale and charitable contribution from Kalush petrochemical managers.

Less than two weeks later equipment was delivered to Kalush Regional Hospital. It was officially presented to the Management of medical institution by people’s deputy of Ukraine Eduard Proshchuk, Head of Kalush regional state administration Zhanna Tabanetz, General Director of the company «KARPATNAFTOCHIM» Ivan Pidsadyuk and Deputy of Mayor Natalia Kinash. Besides of that, with cycle ergo-meter and electrocardiographic stress-test system Kalush doctors received additionally electrocardiographic register – a modern device for daily monitoring of electric cardiograms, which was procured for the costs left from auction and due to charitable contribution of petrochemical enterprise.

CEO of «KARPATNAFTOCHIM» Ivan Pidsadyuk during the visit of the hospital and meeting with medical workers of cardiologic department noted that this modern equipment will be used for diagnostics and for treatment of cardio-vascular diseases.

In this context I’d like to remind that this is not for the first time when Kalush petrochemical managers provide charitable support to medical institutions of Kalush, in particular also to Kalush Central Regional hospital in Pidgirky. One year long they are providing gratis for this hospital medical oxygen, have purchased and installed a new oxygen station for the hospital and constantly support in providing of this institution with disinfecting agents and with personal protective equipment.

General Director of «Kalush Regional Hospital» Ivan Krasiychuk in his commentary to newspaper «NK» pointed that:

«We are thankful to our good partners – company «KARPATNAFTOCHIM» for the activities that have been done  and are being done at the time being for provision of our institution with required equipment, medicines, with everything that is badly needed for a proper job in such complicated time – I am also thankful to the organizers of the charitable party Eduard Proshchuk and Zhanna Tabanetz, because due to their active support the required cardiologic equipment is already available in the hospital and in the nearest future doctors of our cardiologic department will start to diagnose  the state of cardiovascular system of patients». 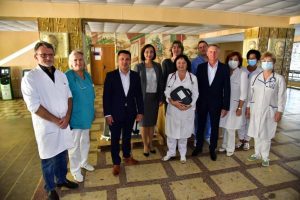 – Till present, – emphasized Maria Ivanivna, – doctors-cardiologists with the aim of diagnostic of  coronary heart disease were using  a very old, worn  cycle ergo-meter. – So we were really pleased with news that for the purchase of a new one was organized a charitable party and people from petrochemical enterprise have also been involved in this good deal; especially were happy doctors that will directly work with so-called medical exercise cycle device. And having opportunity, I’d like to express sincere thankfulness to all sponsors and personally to General Director of «KARPATNAFTOCHIM» Ivan Pidsadyuk.

And here we are-in the building of diagnostic department of Kalush Central Regional Hospital, where new cardiologic equipment will be installed…Doctors-cardiologists Christina Stapay and Mykhailo Vintonovych, standing near a new cycle ergo-meter tell about its advantages in comparison to the old one.

– Activity tests during the examination of patients with  cardiovascular diseases is wide-spread and accessible method of their diagnostics, – they say. – Because within this period is possible to determine such distortions of cardiovascular system, which are invisible in the state of  rest.

What concerns the main distinction between the equipment which we had used for a long time and new equipment, received thanks to our benefactors, this is, first of all, the possibility to record the electrocardiogram during physical activity when a doctor can immediately react for all these changes and define the pathology. If necessary, the doctor can reduce the level of this activity or even stop it. Instead of that chance, at the old device was possible to make a respective record only in 3-5 minutes after the fulfilled person’s activity.

On the photo: ceremony participants of cardiologic equipment submission;

детальніше
Розповісти
Igor Dmytrenko: «It’s so good that in Precarpathian is the producer of such products, which currently save life…»
News

In November 2020 due to coronavirus infection spreading and when in Ukraine occurred serious problems with provision of hospitals with medical oxygen, the Management and Founders of  «KARPATNAFTOCHIM» Ltd. accepted the decision about the supply of this product to medical institutions. But in order the enterprise to be eligible for supply of such product as […]