Myroslav Gerets: «Process engineer at the industrial enterprise must also be the inventor»

LTD Karpatnaftochim > News > Myroslav Gerets: «Process engineer at the industrial enterprise must also be the inventor»

Myroslav Gerets: «Process engineer at the industrial enterprise must also be the inventor» 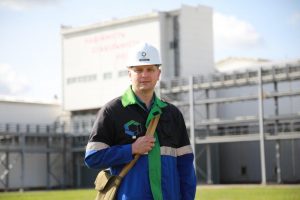 On position of chief production deputy of PVC-S and caustic soda output he was appointed in the year 2018. And during this relatively short time, that flied away from the day when for the first time Myroslav Gerets entered his working office, he showed himself not only like a young person who effectively fulfils his duties, but also like a real professional in solving of technical and technological issues of the production facility.

In the team of PVC-S and caustic soda production facility Myroslav Romanovych is also called like an innovator. And it’s not coincidental that a chief of production facility Roman Sozansky on the eve of professional Holiday of Inventors and Innovators that was celebrated in Ukraine in September 19, asking to the question whether they have the employees who are involved in elaboration and implementation of innovation developments, emphasized Geretz, like the first one.

– He participates in everything that concerns the improvement of equipment operation, technology of products output, quality bettering, etc., – accented Roman Petrovych. – Anatoly Levchenko, chief deputy of the division for membrane chlorine and caustic soda production and Roman Kovalchuk, chief foreman of the brine purification unit and removal of chlorine from anolyte also show their inclinations for invention and innovation.

And Myroslav Geretz says, that the first and really necessary for improvement of creative development for him, like young specialist, became the contests for the best youth scientific-technical elaboration regarding the problems of fuel-energetic complex, which were held at the enterprise.

– In 2010, when PVC-S Unit production was under construction, you were a senior shift foreman and in two years became a chief deputy of this facility. Have you had there the chance to be involved in innovations and inventions?

– Most of my ideas, creative developments, inventions were implemented in life in the division of PVC-S production. They mostly refer to the optimization of industrial process, improvement of process equipment operation, introduction of the additional equipment. There were also, for sure, such elaborations, from realization of which the economical effect was received. For instance, due to additional points setting for NaOH feeding to the process of PVC output for neutralization of HCl and correspondingly continuation of stable pumps operation, installation of pipeline for the supply of PVC to the bagging unit, etc. Frankly to say in the achievement of positive results is not only my merit, but also the activities of leading specialists of the Unit, as well as of design department of the Company, personnel of chief mechanic department, chief energetic, chief Metrologist, etc…

– Do you have possibility and time on the present position to do the invention activity?

– Whether I wish this or not, but I have to do this. Such targets and duties are indicated in the Official Job Instruction for deputy chief of production. I must constantly make the analysis of technological process take care about its improvement, to elaborate and to participate in the realization of measures concerning the increase of efficiency of production, aimed at the reduction of materials consumption, decrease of products intensity, increase of labour and to fulfil a lot of other tasks. That is why engineer-technologist at the industrial enterprise should be to some extent an inventor. And most inventions and innovatory offers are well implemented only after the made analysis and troubleshooting concerning the reasons of malfunction in the process, shutdowns and failures of process equipment.

– And with what important elaboration are you busy now?

– We are trying to find materials, adsorbents for installation of drying unit for VC in order to decrease its moisture in the recycling process.

– In October at «KARPATNAFTOCHIM» Ltd., is foreseen the shutdown of plants for overhaul of process equipment and utilities. Which main activities are planned to be done at your Production Unit during this overhaul?

– It is planned to shut down the PVC-S and Caustic Soda plant  in October, 26. Actually some process equipment will be out of operation a bit earlier – in October 22 or 24, in order to carry out all planned jobs and to resume the production output in time, within two weeks, that is till November 14.

And at VC production facility we must make the inspection and cleaning of columns, oxychlorination reactors, strengthening and substitution of a part of steel structures of pipe racks and service platforms. At the Unit of Chlorine and Caustic Soda by Membrane Method is planned to open and to check the condition of all apparatus and assemblies, to substitute the filters of wet and dry chlorine, and in salt storehouse to renovate chain band.

In total this is a great scope of activities, which are not possible to fulfill in such short deadlines only by the efforts of our employees and personnel of repair workshop of «KARPATNAFTOCHIM» Ltd. That is why some specialized third party companies will help us to reach our target.

Interview was made by Vasyl TKACHUK.

On the photo: Myroslav Gerets.