Mykhaylo Kyzymyshyn: «Activities, performed by specialists of the Company «Technolog», are estimated by me very positively»

LTD Karpatnaftochim > News > Mykhaylo Kyzymyshyn: «Activities, performed by specialists of the Company «Technolog», are estimated by me very positively»

Mykhaylo Kyzymyshyn: «Activities, performed by specialists of the Company «Technolog», are estimated by me very positively»

In the edition of «NK», dated July, 17 this year, was published the information that at air separation unit of «KARPATNAFTOCHIM» Ltd., failed a turbo expander, intended for the air cooling and for cooling of the unit in general, which could cause the entire suspension of products output at the enterprise.

Process personal of the unit, employees of Chief Metrologist service and repair service of the enterprise, as well as specialists of a specialized Company «Technolog» from the city Sumy did their best in order within optimally short term to remove faults in the operation of this extremely important machine, and in order the nitrogen and air separator unit to be operated again.

The editorial staff of «NK» asked a Chief of air separator unit Mykhaylo Kyzymyshyn how it was possible to reach this target and how the unit operates now after the execution of all necessary repair activities and putting the turbine expander into operation. 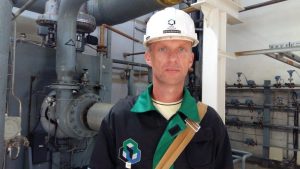 –  The main reason of this machine tripping, – tells Mykhaylo Myroslavovych, – was a damage of bearings and sealing, and that caused the breakage of a rotor. This fact was confirmed after coming to our enterprise a group of specialists from Company «Technolog» together with Director of that enterprise Serhiy Pryymenko. And if some parts, and namely bearings and seals were available here, we did not have a spare rotor. After examining of all possible options of purchase of the rotor, as well as its urgent manufacturing, and in particular at German Company Atlas Copco, which is the manufacturer of turbo expanders, was taken the decision to renovate this machine and the damaged rotor at the enterprise in Sumy.

And today І can confidently say that it was almost a single way out of the current situation. Nowhere at the warehouses could such machine be found, and for its manufacturing at the above mentioned German Company was necessary to wait at least 10 months and it could not for sure satisfy us. In order to prevent the shutdown of the enterprise, the employees of commercial department within the period, beginning from June 29 and till the start up of our unit on the July 11, were doing almost impossible efforts for delivery of nitrogen and air to Kalush from various enterprises of Ukraine and from outside.

I do estimate very positively all activities, performed by specialists of Company «Technolog» that worked both directly at the unit and in the city Sumy, where a rotor was renovated, because already one month long a turbo expander works successfully and we secure the plants of the enterprise with nitrogen and air.

I’d also like to mention that in the period, when specialists from Sumy were renovating the rotor, process personnel of the unit together with specialists of our repair service were performing important jobs for heat exchangers and cooling tower basin purification. Simultaneously workers of Chief Metrologist service were making the repair of transmitters and other equipment.

– Were the specialists of  «Technolog»present during start up of the unit?

– After the installation of the renovated rotor of turbo expander, which, apropos, with the aim of time spare was delivered from Sumy to Kalush by helicopter, and till the bringing of the air separator unit to the necessary capacity, that pursuant to Regulations needs approximately three days, they stayed at the unit and together with a personnel observed its operation. They left the unit only after the turbo expander produced the cold of a required temperature and that permitted to start the output of our products.  And as far as I know, even now specialists of Company «Technolog» constantly communicate with specialists of Chief Mechanic department of the enterprise concerning the operation of this machine.