Kostiantyn Homan: “The most important task of shutdown repairs is to restore the state of technological equipment for reliable operation for two years”

LTD Karpatnaftochim > News > Kostiantyn Homan: “The most important task of shutdown repairs is to restore the state of technological equipment for reliable operation for two years”

Kostiantyn Homan: “The most important task of shutdown repairs is to restore the state of technological equipment for reliable operation for two years”

From Monday, October 26th, KARPATNAFTOCHIM Ltd. has started a shutdown repairs of technological equipment and pipelines. On the same day, both specialists of the enterprise’s repair department and contractors were already working on the territories of the two main production plants – ethylene and polyethylene and suspension polyvinylchloride resin and caustic soda, and began to perform scheduled set of works.

Actually, the first of the questions addressed to Kostiantyn  Homan, the chief mechanic of KARPATNAFTOCHIM, when meeting with him, concerned the specifics of the current shutdown repair, the scope of the scheduled work and the established deadlines for their implementation. 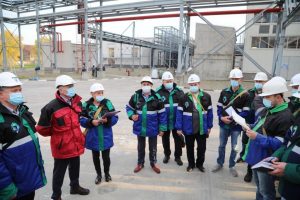 As well as two years ago, this year we carry out shutdown repair in the autumn period, – says Kostiantyn. – But the peculiarity of the present is that, in comparison with the previous one, it is planned to perform much more work, both in terms of the nomenclature and in terms of total volume. In addition, we must cope with everything in a shorter term.

I would also like to note that the company allocated several times more funds than in 2018 for the purchase of materials, spare parts, the purchase of custom-made equipment, preparation and carrying out of shutdown repairs with the help of contractors.

– How long repair of technological equipment and pipelines will last at KARPATNAFTOCHIM?

– We plan to complete the main work on November 9. After this, the equipment will be transferred to technological services for pressure testing, filling systems and performing start-up work. The production plants start-up is carried out sequentially. We expect to receive the first tons of polyethylene on November 13. The polyethylene plant should be brought into operation on November 15, and from the next day we will receive vinyl chloride.

The start-up process will end on November 18 by the production of PVC resin. And in the future, it will be necessary to ensure the operation of production facilities at maximum capacities for the next two years.

– Which of the most important and basic repair works are planned to be performed at the sites of the two production plants?

– As I have already noted, their total volume is considerable. But of all the planned repairs, I can more specifically single out the main and important ones related to the mechanical part. However, first I will say that the main task of the shutdown is to ensure the restoration of the state of technological equipment, pipelines, process control systems for the reliable operation of the entire production chain over the next two years. 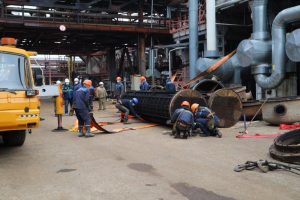 Now I will briefly dwell on the main work during the repair, which, so to say, are the responsibility of the chief mechanic’s service and is controlled by it. At the ethylene and polyethylene production, it is planned to perform many important works related to the opening, cleaning and full revision of heat exchange equipment, column equipment trays, repair of process pipelines, hydrogen compressors, steam turbines that drive cracked gas, ethylene and propylene compressors. In particular, the commissioning and start-up of these turbines of cracked gas, ethylene and propylene compressors is carried out under the supervision of a specialist from the German company Siemens. Particular attention will be paid to the repair of three heat exchangers, which have been in continuous operation for two years.

It is also envisaged to carry out complex and voluminous work, it will relate to the replacement of the SPM pipelines in the hydrocarbon production department. It was entrusted to perform it by specialists of the well-known company “NAFTOKHIMSPETSMONTAZH” from Odessa.

At the polyethylene production plant, the melt pump gearbox is repaired with the replacement of bearings on it. These works will be carried out under the supervision of a specialist from the Swiss company MAAG PUMP SYSTEMS. Before his arrival at the enterprise, the workers of our repair department are obliged to dismantle this gearbox.

At the SPCV and CS production site, the largest amount of complex work is planned to be performed during the shutdown repair at the old vinyl chloride production plant. Here, the problem areas of technological pipelines will be replaced, this repairmen will do the TEM-Netishyn. At their own enterprise, blanks were prepared in advance for these works.

The repair of oxychlorination reactors based on the results of diagnostics shall be carried out by the employees of the repair department of KARPATNAFTOCHIM Ltd. A large amount of work on dismantling of valves was entrusted to the specialists of RON-TECH LLC from Ivano-Frankivsk, whom we also involved in shutdown repairs at the enterprise in 2018. And the repair of these disassembled valves and accessories should be carried out by the repair department workers in their workshop.

Specialists of “NAFTOKHIMSPETSMONTAZH” are engaged in opening, cleaning, repairing the system of the EDC cracking unit. They were also instructed to carry out the same work on two columns in the vinyl chloride plant. And five more columns will be opened, cleaned from contamination and repaired by the specialists of the Kiev firm “ARKHI-BUD”. By the way, for the first time this company was involved in the work that is planned to be performed at the enterprise during the shutdown repair. Also, for the first time, the Kharkiv company “REMMASHRESURS” will work at the vinyl chloride production plant and chlorine and caustic soda production plant by the membrane method, and the research and production company “HREIS-INZHYNIRINH” from Sumy, which specializes in new technologies design and the production of modern high-quality sealing and granulation equipment, special-purpose sealing products and the provision of services for their repair and maintenance. Specialists of the latter among the aforementioned companies are engaged in the repair of mechanical seals on reactors.

The specialists of UBA LLC from Kalush will open, clean and, if necessary, repair the technological equipment at the SPVC production plant, and the repair of dynamic equipment (centrifuges, compressors) here will be carried out by our repair department employees. However, the main specialized contractor, which will deal exclusively with the revision and repair of compressor equipment in the two production plants of KARPATNAFTOCHIM, will be known to the enterprise for a long time the Sumy firm “TEKHNOLOH”. And only due to a short deadline, determined for this shutdown repair, it was decided to entrust the planned work on some hydrogen compressors to another company from Sumy – “SENSI” that will also work for us for the first time.