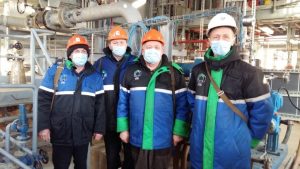 Operation of all industrial units, including such a modern one, as Polyvinyl Resin Suspension production of «KARPATNAFTOCHIM» Ltd., cannot be managed without unforeseen shut down of any equipment.

So the team of PVC-S unit did not expect that the pump of recovery VCM pumping (ready for processing) will suddenly fail.

– The information about the pump malfunction, in particular a short circuit, was confirmed by a specialist of the chief power engineer’s service –  tells Konstantin Homan, a chief mechanic of the enterprise. Immediately after that, an operational meeting was held with the participation of specialists from the departments of chief mechanic and energetic department as well as repair department of the enterprise and technological personnel of the plant for PVC-S production, on which it was decided how to organize the dismantling and disassembly of the pump in the optimal time, as well as take the necessary measures to repair it.            What exactly needs to be done to get the pump running again became known after it was opened. It turned out that the pump stator had failed and the rotor, including its shaft, had been damaged. The stator was available here, so it was possible to replace it, but as for the damaged pump rotor, it was necessary to perform a range of activities, which were professionally and in the shortest possible time performed by workers of the workshop for process equipment repair from PVC-S and Caustic Soda facility as well as from repair department of the enterprise.– We had to carry out such work for the first time, tells a chief of the unit Petro Bagrynivsky. – Till present we only made bearings replacement on that pump, but it became necessary to replace the stator and to restore the rotor too. Adding to the difficulties was the fact that the pump was technologically complicated, and to open it, a stainless steel protective cover had to be cut and then welded so as to achieve proper tightness.        All these works were performed by our employees in shifts around the clock. The head of the technical supervision department of the enterprise Taras Fedevych provided us with proper assistance in conducting the welding works.

During four days till putting the pump in proper operation perfectly worked such specialists, as a chief welder of our repair division Vasyl Torkonyak, electrical welders Mychailo Mocharsky, Vasyl Charkovsky, fitters Zinovyi Pufka, Mychailo Yatsushchak, Igor Shcherba, a head of the sector Mychailo Begun and a shift foreman Ivan Barnas. Our other manufactures and specialists of the chief mechanic’s department Alexander Shevaga and Vitally Shvets joined in the performance of these difficult works

Roman Sozansky, a chief of PVC-S and Caustic Soda plant, could not hide his satisfaction that all necessary repair activities were carried out in an optimal time

– The message that the pump for VC pumping failed was a bad surprise for us, – tells Roman Petrovych. – And although our repairmen have not yet faced such a problem, but still they were able to do everything efficiently and quickly, working for this around the clock. Thanks to their professionalism and diligent work on January 28 we supplied VC to the unit of PVC-S production and the restored pump started working again.

So, I would like to take this opportunity to thank all those involved in these difficult but very important repairs.