Ivan Fedoriv: “June 29, 2017 should be considered the second birthday of the ethylene production plant”

Ivan Fedoriv: “June 29, 2017 should be considered the second birthday of the ethylene production plant”

With Ivan Fedoriv, head of ethylene and polyethylene production at KARPATNAFTOCHIM LTD., we’ve met a few days before the professional holiday – the Day of Oil, Gas and Oil Refining Industry Employees, so the conversation started with this topic.

– We expected, as in previous years, – says Ivan Mykhailovych, – for ceremonial meetings, a holiday in the stadium or park, but the coronavirus pandemic has made its adjustments, so we must celebrate the holiday in new conditions… 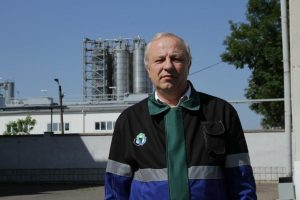 – And where did the career of the current head of one of the most important departments of modern “KARPATNAFTOCHIM” and the only one in the nomenclature of Ukrainian products begin?

– I have arrived to the PA “Chlorovinyl”” at that time in 1984 after graduating from Lviv Polytechnic Institute, where received the chemist-technologist specialty, that is, the specialty that forever connected me with Kalush, its largest enterprise. As, I am from Stryi district and at first the thought was to find a place of work somewhere closer to home, but everything changed at once how I arrived to this already well-known enterprise

I began my career here as a foreman, and eventually became a senior shift foreman of the department for the production of chlorovinyl. But two years later, when the construction of state-of-the-art production EP-250 was being completed and young qualified personnel were needed, I was invited to take part in commissioning.

Initially, I was also appointed senior shift foreman of cracking, compression and separation of cracked gas department, and eventually became deputy head of this department. It was 1991 and after that I have been working in this position for exactly 20 years.

– You could say so, although everything seemed to happen naturally. Then there was a change of generations, including in the management of production and the enterprise. And I worked in the new position of deputy head of ethylene and polyethylene production for only two years, after I was appointed head of production.

I would like to say in this regard that this was a very responsible period both for me and for KARPATNAFTOCHIM. After all, the situation on the market of petrochemical products was unfavorable for the company, as, its production plants were shutdown. The support of the state in the person of the government which was headed by Mykola Azarov then was necessary. And here was the message that the Prime Minister is to come to clarify the state of affairs at the enterprise. Began to hastily prepare for the start-up of production plants, in particular for the production of polyethylene. It was planned to put into operation then all our production plants, but it did not happen. After the government delegation arrival approximately two months plant for the production of polyethylene, and even less – at the plants for the production of vinyl chloride, chlorine and caustic soda and polyvinyl chloride resin worked on the ethylene supplied from Hungary. And then they all stopped again, as, the situation in the state has become even more tense not only in the economy, but also in political life.

– And this was the beginning of a long shutdown time of production, which lasted for almost five years…

– But in 2017, the situation for the recovery of production was much more favorable. The government of Ukraine and the new owners of the enterprise helped to realize this not with words, but with concrete decisions. And how much effort was put by those workers who until the end believed in the possibility of restoring its work, to carry out work on the pressure testing of technological equipment, including our production, to conduct all the necessary commissioning works.

Start of production was long and difficult. Especially ethylene production plant, which are located on a large area and is very complex technologically. And during this period, some (almost 30 percent) of qualified personnel quitted due to age and other reasons. Therefore, I can now say that in June 2017, that is, 30 years after its first commissioning, there was the ethylene production plant new start-up.

But when in 1987 teams of specialists from Germany (Linde), Moscow, Volgograd and other cities of the USSR, where similar productions were already operated, took a direct part in the commissioning work, now we have done it on our own.

Therefore, June 29, 2017 should be considered the second birthday of the ethylene production plant.

– And, judging by the results of her work in subsequent years, including in 2020, was it successful?

This was largely facilitated by the use of naphtha and gas mixtures in the form of raw materials and in appropriate proportions. This allowed us to increase the production of our main products – ethylene and propylene. As for another important type of raw material – diesel fuel, we last used it during start-up work in 2017, and after that all start-up work is performed using naphtha, although it was previously believed that diesel fuel is indispensable at start-up.

This technical solution is more cost effective, because, firstly, naphtha is cheaper, and secondly, we got rid of problems with the operation of the product pipeline…

–  How do you assess, Ivan Mykhailovych, the current work of the ethylene production plant?

– Your question preceded what I wanted to say next. The fact is that today the installation is brought to a very good mode of operation, which allows to work without production problems, that is without forced shutdowns. And this is primarily due to the fact that our owners, the company’s management paid due attention and allocated financial resources for the replacement and overhaul of heat exchange equipment.

It is worth remembering that in the past, even more economically favorable periods, such funds for equipment upgrades were not allocated. In 2018– 2019 and already in 2020, all heat exchange equipment of the ethylene plant was replaced or repaired mainly by the repair management teams of the enterprise. Evidence of its successful work is the fact that the last time in March of this year, after the planned work on cleaning the equipment, we put the installation into operation, so it is still working for six months, thank God.

–  What would you like to say at the end of the conversation to the production workers, all the petrochemists of Kalush?

– First of all, I wish everyone good health, as well as their families and relatives. And I sincerely wish everyone that their homes were always cozy, and work at the company added good mood and faith.