Boris Kryklyviy: «Our Unit is perfect, modern and economically profitable…»

Boris Kryklyviy: «Our Unit is perfect, modern and economically profitable…»

Just 10 years ago – October 9, 2010 on the first newspaper column of so called at that time Newspaper «Kalush Naftochimik» was written the press release, that at a new constructed Unit of Chlorine and Caustic Soda Production by membrane method, Kalush petrochemical workers received the first kilograms of chlorine…

And it was an important event not only for the team of Company «KARPATNAFTOCHIM», but for Kalush, Precarpathian and for the whole Ukraine. Hence the putting into operation of a state-of-art facility signified the transition of a whole Kalush Petrochemical Complex to a new process scheme of operation, to which in a half of year was added one more new Production facility of suspension polyvinyl chloride (PVC-S).

But today we will speak about the Unit- hero of the anniversary and its team. And my interlocutor will be a well-known among Kalush petrochemists-chlorine specialist, veteran of the enterprise Boris Kryklyviy. 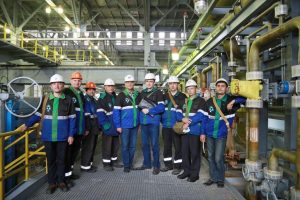 – Boris Izotovych, you had to be the participant of closing of an old Diaphragm caustic soda plant, as well as to participate in the team of main constructors of a new Membrane Chlorine and Caustic soda plant. Why was there the necessity of a new production facility construction?

– Till that time at the enterprise were in operation two units of caustic soda and chlorine output by electrolysis via diaphragm method. Their design capacity was correspondingly 66 and 125 thousand tons of marketable caustic soda. And chlorine was produced from technological process like by-product and was used in the process of vinyl chloride production.

These both Units were designed and constructed, based on the equipment, which was manufactured at the enterprises of a former Soviet Union. And within 20 years and more of their intensive operation, structures, communications and the equipment became physically and morally old. Main product – caustic soda due to a high energy consumption of production and low quality was not competitive at domestic and especially at foreign markets. Moreover the unsatisfied state of equipment could be a serious threat to the health of working personnel, to inhabitants of the town and to people from the inhabitant settlements.

In order to improve somehow the environmental situation it was necessary to renovate the equipment, namely diaphragm cells, but there were not necessary parts available. We needed, for instance, new cathodes which were manufactured in Russian city Dzershinsk, but at that time their manufacturing has been suspended. In 90th years in Russia people were also deliberating to change for membrane method of chlorine production.

– What was the main advantage of membrane method?

– While taking the decision what process of caustic soda and chlorine to implement, the former Chief Engineer of the Company Georgiy Kunev insisted not to have in a new scheme a liquefied chlorine, but straight away to have gaseous chlorine, which will come from the Unit to Vinyl chlorine production facility.

The acceptance of such decision was based on the issue not to keep liquefied chlorine at the storehouses, like it was with old facilities. At that time according to corresponding state documents was allowed to store at the territory of the enterprise till two thousand tons of liquefied chlorine, though sometimes there were till three thousand tons, and some amount was in the tank cars at the railway stations. It created a huge ecological danger, and due to that a safety factor of membrane method played here the main role.

The important target of a new method was also the essentially higher quality of products. It mostly applies to caustic soda, which at present has a high demand in Ukraine and outside Ukraine.

– Were there not consumers for caustic soda in the time of Soviet Union?

– Surely, they were, but only during so-called planned economy, when it was known in advance where and what amount of this or other products should be shipped. But in the first years of Ukraine independence, when were closed cotton factories, cellulose-paper plants, and namely Zhydachiv factory, we had more and more complications with its sale. Actually at that time its sole consumer was Mykolayiv aluminous plant. But in order to deliver it there was necessary to win the competiveness from such cities as Pervomaysk, Kharkiv region and Dniprodzerzhynsk, Dnipropetrovsk region. Management from Mykolayiv had a good choice at that time, and quality of products and distance to the producers were of a great importance. 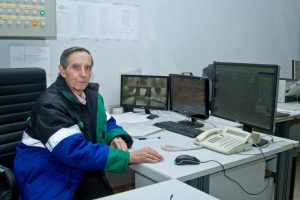 – Boris Izotovych, tell, please, whether the former staff of the units, which stopped their activity, was ready to master new technology?

– Some part of workers from those Units have found job at other Plants of the enterprise, and to some people was proposed to work at a new Production plant, which was in the phase of construction and in the middle of 90th years was headed by a present General Director of Company  «KARPATNAFTOCHIM» Ltd., Ivan Pidsadyuk.

Concerning our readiness for mastering of a new process, we had some theoretical imagination about it. But when we, so to tell, touched the basics, we understood that it is much more complicated and requires additional knowledge, practical experience and new approach to technological process. This is an import and expensive equipment, and before we worked with the soviet equipment, which was easy to repair and to substitute.

Among the specialists, who participated in the commissioning of a new Unit, and who are working now in the team are a present chief of the Unit Volodymyr Olenych (at that time we both were deputies of  Ivan Pidsadyuk), as well as Sergiy Ivaskiv, Igor Vyrgalo, Mykola Kocelovskyi, Marianna Kolos, Roman Kovalchyk.

– What are the brightest memories from that time of mastering of a new Unit?

– Unit was built under technology of German Company UHDE, which was also a General contractor of all activities performing. It means that with participation of German specialists were made all civil works and technology mastering. The mounted equipment was also mostly from German manufacturing, though some parts and mechanisms were from other countries of Europe.

But to master practical skills was difficult both for well experienced specialists and for persons who came after High school graduation. Much was helped by German specialists that were involved in all starting procedures, passing along to us their knowledge and experience. Together with our operators and other process personnel they worked shifts, were adjusting the equipment and supervising the actions of our personnel.

A great importance in successful mastering of a new process was training of a core staff of production facility-operators and leading specialists at the analogical plant, also built by company UHDE in Polish town Wroclawek, as well we visited and took acquaintance with operation of some plants in Germany.

What concerns the main difficulties, which we encountered at that time, was our poor knowledge in computers that at the beginning somehow complicated the technological process conducting.

– But in the history of comparatively new Unit was a period, so to say, of its second birth. How was its start up going in 2017 after almost five years of downtime?

– Oh, yes… Spring and June of 2017 was really the period of the second birth of the Unit. After durable downtime, unknown before in the history of operation of such Units, was necessary to starts jobs from deconservation of equipment and then step by step to put it in operation.

Our Unit is perfect, modern, and economically profitable, and could not be compared with those Units, that were in operation before. It also has perspectives for stable operation for several decades. But in order to continue its technological modernity it’s desirable to keep up with the times, constantly introduce the novelties of Company UHDE and others. I suppose that in the nearest future will be necessary to substitute the electrolyzers for new, more economically profitable and more reliable in operation. The present team of the Unit is in the position to overcome these and other new trials.

And І am really happy that I also made my efforts and contribution for the appropriate operation of the Unit.